Riding through the winter solstice

I don't know what it's like where you are but here in Christchurch it is most certainly winter! In fact, last Saturday was the shortest day (so I guess we're heading back towards longer days again...but normally it's about the time the weather starts to really get into the wintery spirit). Fortunately, although there was minimal daylight, the sun was out (in a cold, wintery way).

Sunrise was 8:02am. We were a little disorganised so it was more like 8:05am when we were pulling out of our driveway. Fortunately The Goose was even more disorganised than us and was still eating breakfast when we turned up at his door so we went for a little spin while we waited. And then we were off...with a nice gravel hill to start with - up Rapaki to the Summit Road. I was very glad it was early in the morning and not too many people were about as there is one downside to tandem riding and that is that people do like to comment on it and that sure gets tiring after a while. 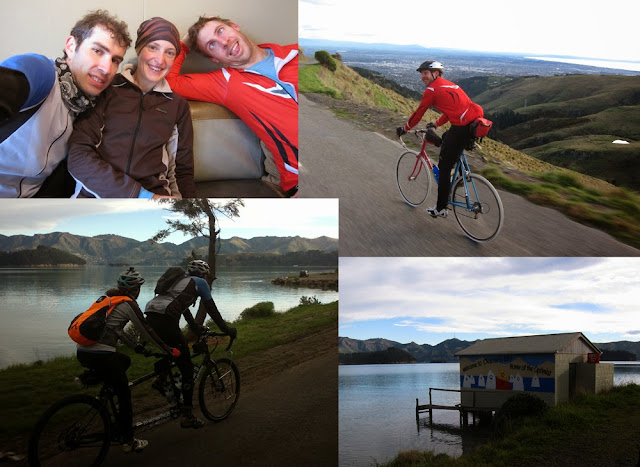 We headed along the tops and down to Gebbies Pass with lots of whizzing and fun times then along the harbour edge to our first cafe stop of the day at Diamond Harbour where we lounged around drinking hot chocolates.

Next up was the second big climb, up to the Purau Saddle. I love this climb. The road is quiet and the climb is never too steep but is still relentless enough to be exhausting. We then whizzed down to Port Levy for a quick view of the sea before heading straight up again for the 3rd big climb of the day, up Western Valley Road, a nice (although I don't think M or the Goose would have called it nice!), truly relentless gravelly climb up to the Port Levy Saddle. 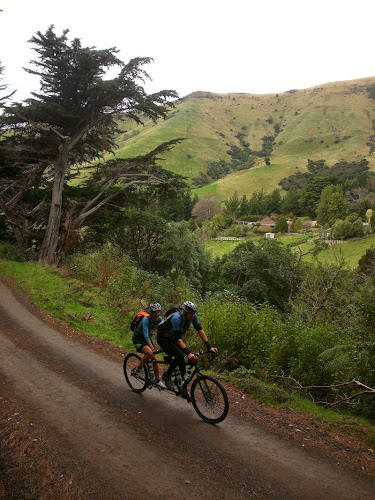 Slowly warming into the endless climb up Western Valley Road to Port Levy Saddle and loving every minute of it!

We all collapsed at the top, feeling rather hungry and tired. So it seemed an excellent time to pull out the mini chocolate cakes I'd made to celebrate The Goose's birthday. We practically wolfed them down! 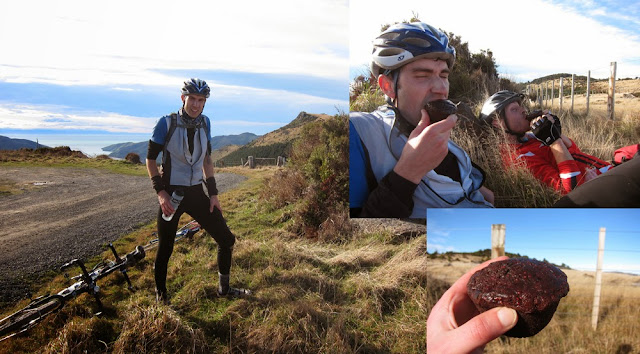 The cake recipe, if anyone is interested, was a modified version of the Red Velvet Cake from The Vegan Table by Colleen Patrick-Goudreau. Basically I substituted some of the flour for more cocoa powder, used coconut cream instead of soy milk, added some chopped chocolate and swirled some raspberry jam through each of the mini cakes (baked in a texas muffin tin - it made more than my tins could handle so I also mostly filled a regular muffin tin too). I also didn't add the food colouring. I totally recommend this cake. It's so moist and delicious!

After a rather exhausting, bumpy descent down into Little River (definitely a good test of how the tandem handles gravel descents) it was time for some serious refueling at the cafe there. My eyes were definitely bigger than my stomach in that moment though as I could only finish one of the samosas on my plate and virtually none of the salad. I must have been feeling tired! So the boys polished off my salad while I took the other samosa for the road. Don't worry though, my appetite came back with a vengence up the next hill! 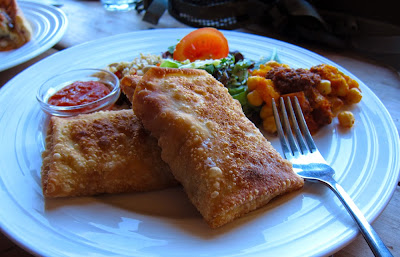 And then for the last, and biggest, climb of the day, up Reynolds Valley Rd to the top of Bossu Rd. I was definitely dying up this hill as it just kept going and going! It was definitely spectacular at the top though with stunning views of the Banks Peninsula in all directions. 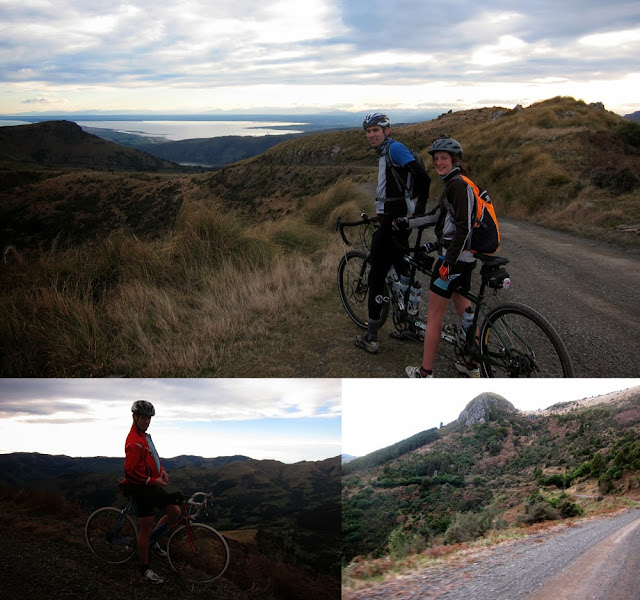 Clockwise from top: Looking down Bossu Road towards Lake Ellesmere; Reynolds Valley Road; The Goose looking all suave near the top of the climb.

So all that remained was the descent down to Birdlings Flat, a nice little jaunt along the rail trail and then a cruise back into Christchurch. We'd be back not that long after sunset (4:59pm) right?

Not too far into the whizzing down Bossu Rd we got stopped by a vehicle informing us that the crossing over the ditch (draining Lake Forsyth out to the sea) to Birdlings Flat was, well, no longer a crossing so perhaps we might want to reconsider riding all the way down there. The boys, being boys, decided that surely there would be a way across and perhaps it wouldn't be too deep anyway (I was definitely not happy about this but when you're on the back of a tandem you don't exactly get that much say!) so down we went, chasing sheep left right and centre.

And yeah...there was no crossing and no matter how much wading The Goose did the water was not looking shallow enough to walk across. To make it more exciting, the sun was busy setting and only M and I had lights (The Goose was clearly under the mistaken impression that we'd actually make it back by sunset!). After well over an hour of dithering we decided to head back up the hill again...only just as we were about to head off into the darkness a local turned up with his little dingy offering to rescue the maiden in distress and her companions (he said he was only doing it because there was a girl in the group - yep, sometimes it definitely pays to be female!).

After 4 trips we were finally across (and the bikes of course!) and off to the rail trail...in complete darkness! There was much whizzing along (and desperate sandwich eating as we got more and more tired) and general good times and we made it to Motukarara in good time and good spirits. 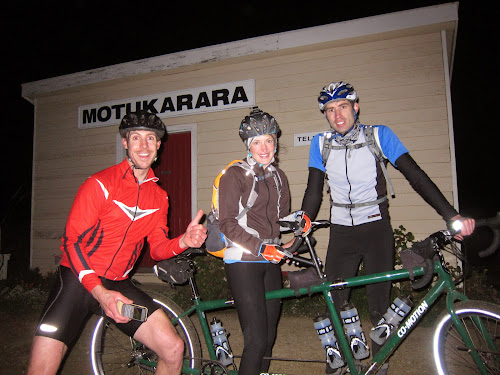 Once on the road again M decided it was time for some time trialling much to the despair of The Goose and I. We finally managed to rein him in at Tai Tapu and the rest of the ride was at a much more civilised pace but I sure was glad to get home...nearly 3 hours after sunset!

The ride has made me super excited for more explorations on the backroads of the Banks Peninsula. It's like an adventure playground for this kind of riding and it's right on our doorstep. Bring on summer and the longer days.