Riding on the choo choo train

He was a tiny little man with an immense low-slung protuberant belly of the kind that women have when they are eight and a half months pregnant, and he carried this great ball in front of him very proudly, as if it were a special medal or a coat of arms.
- Going Solo by Roald Dahl
My Aunty turned 60 recently so that called for a bit of a celebration. As usual, I was left in charge of making the cake. For my Dad's 60th I made him a rocket ship cake. For my Mum's 60th I made a gingerbread house (with a chocolate roof) complete with a garden. Yes, the old Australian Women's Weekly Children's Birthday Cake book gets a lot of use around here. My Aunty was flipping through it and got her heart set on the train cake so that became my mission...

But first I had to veganise her favourite lentil roast (she was making a normal roast and wanted her usual lentil roast to go with it). Personally, I thought it was kind of boring and I'd make a whole heap of adjustments before making again but I've posted the recipe at the bottom of this post in case anyone's interested.

I ended up running out of time to make the gravy 'cause decorating the cake was taking much longer than I'd anticipated (although I did sleep in which didn't help) so I had to make an emergency call to Mum to help out (a tahini gravy from this old wholefoods cookbook that we both have). Lucky we have some of the same cookbooks so I could just tell her the name of the book and the page number. Yay! 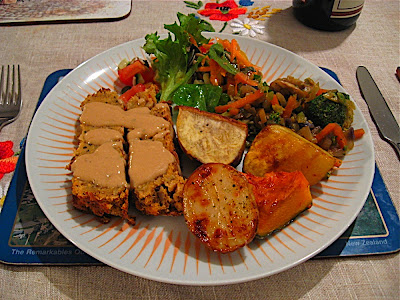 So here's my dinner plate - lentil roast with tahini gravy, salad, stir-fry veggies and roast potato, kumara and pumpkin (I didn't end up eating the potato in the end though...I just can't love potatoes, at least not like how I love kumara).

I then proceeded to get a bit tipsy on wine (I was given this bottle as payment for raking mountain bike tracks at my mate's farm). I'll be honest and admit it only takes 1 glass and I'm a bit lost. 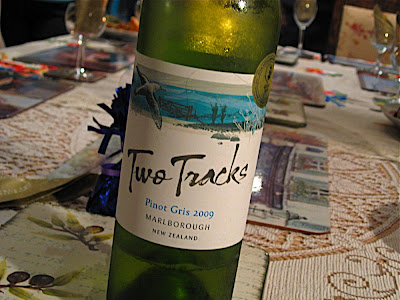 My cousin D was in charge of the evening and her belief is that dessert is the main meal of any celebration so there was lots of it. My dessert bowl consisted of apple crumble and trifle (after a bit of instruction, Mum was able to whip up my famous trifle...feels a bit weird knowing she made it and not me but it was still awesome). 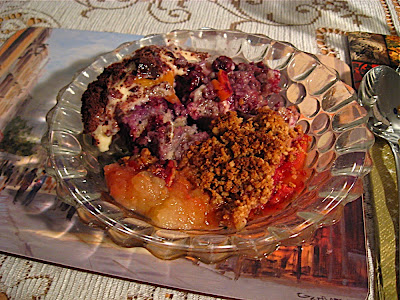 I'd lent Mum my copy of The Damn Tasty Vegan Baking Guide but luckily there are my favourite cake recipes in Kris' other book, The 100 Best Vegan Baking Recipes. I made 2 different kinds - carrot cake and chocolate cake (using the Black Forest cake recipe) with the front being all chocolate and the 2 carriages being mostly carrot cake with a thin layer of chocolate along the tops (to make the carriages higher). Luckily it all worked out because I started baking without any idea on how I was going to put it together...note for next time: plan otherwise you'll email your cousin and call your Dad several times out of panic. 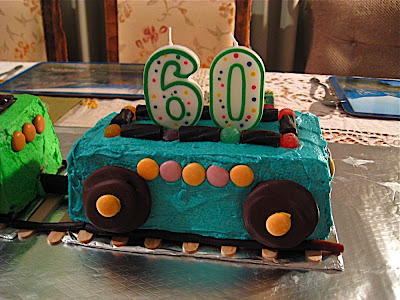 Here's my slice of cake. People were very reluctant to destroy the cake which was both flattering and annoying. Come on people, it's made for eating... 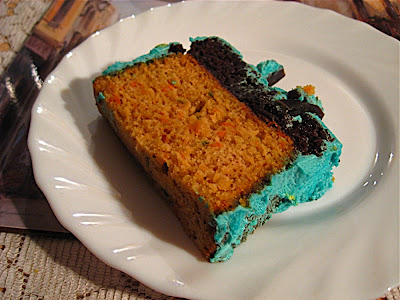 And then to top off the evening I decided to play their piano...bad idea for a girl who recently cracked a bone in one of her fingers. I am a hopeless case!

Anyway, here's the recipe for the lentil roast if anyone is interested. I have no idea where the original recipe came from...

Put the lentils and water in a saucepan and simmer gently, uncovered, until the lentils are tender and all the liquid is absorbed (which is apparently about 20 minutes but I can't remember how long it took me).

Fry the onion in margarine (or oil if you want but I felt in the mood for margarine) for 10 minutes until soft and lightly browned then add this to the lentils together with the mixed herbs, cheese, lemon juice, flax egg, salf, pepper and paprika.

Add a few crumbled weetbix (I used 4 from memory) to stiffen the mixture.

Oil the loaf tin and coat it lightly with flour and then spoon the mixture into the tin. Lightly brush the top of the loaf with a bit of oil and bake 45 minutess until brown and crisp, basting the top with oil from time to time.

Tip out of the tin and slice, served with tahini gravy or similar.