Sunday was the first of 4 foot events in the North West Rogaine Series and was held out on Pulpit Rock. As I explained in the last post, rogaines are different from regular orienteering events as you are given a time limit (in this series it's 90 minutes) and a map with all the controls on it and you have to try and get as many as you can in that amount of time. The controls are worth different amounts of points as well. All those from 30-39 are worth 30 points, 40-49 are 40 points and 50-59 are 50 points. 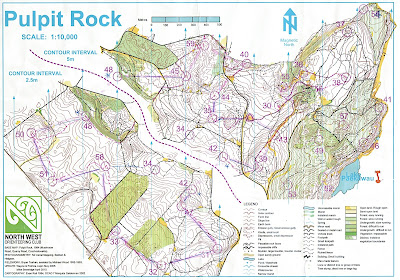 You can sort of see some of my working markings and eventual route if you click on the map. It's still not really big enough to get a good view though.

The added complexity of this map was that the top half of the map was using 5 metre contours (it's the steeper, more rugged area of the map) and the bottom section was using 2.5 metre contours. Transitioning between the 2 sections was quite a mind game.

I planned out a rough route but ended up finishing that loop with half an hour to spare so headed up towards the top right of the map to grab some more points. It's pretty typical of me to underestimate how much I'll manage to do in the time given so the goal for the next event is to plan more ambitiously (but with shortcuts back if time isn't on my side).

I ended up getting 820 points which was okay but not great. From #39 to #43 to #56 I was pretty much walking 'cause it was so bloody steep and I was pretty tired by then so I'm not sure if it was such a great idea to leave that section to the end! Oh well...next time! But I did beat Owen and that's all that really matters!!! Oh, and my mate Rick and his friend came out to give it a go to and had a great time...I love converting people to the awesomeness of orienteering!