Turkey Ridge is one of the few farmland maps we have in the Auckland region and I think it's been a couple of years since I last ran there (I vaguely remember it was overcast and I stuffed up somewhere stupid but really that's not that uncommon!). It's steep...lots of contours, made worse by the fact the map uses 5 metre contours (that means that it's 5 metres in height between each contour line on the map...does that makes sense?).

Anyway, I was determined to plan my route better this time and be a bit more ambitious. Turns out I was probably still not ambitious enough but we'll get to that. When we got handed the maps it was raining so I went back to my car to plan my route so had no idea what other people were planning and just hoped I hadn't picked a stupid route. Obviously not as there was a huge train of us heading to #54 as their first control. 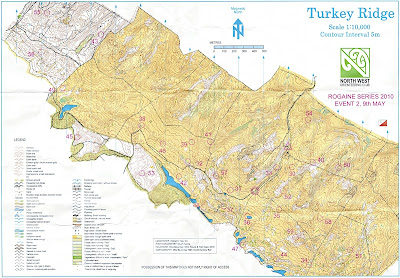 I got round most of the loop on the right-hand side of the track within 30 minutes so I realised then that I was going to have to head further out to the left than planned. As it turns out, I had a very similar route to another girl in my grade so we were sort of racing each other for most of the time. Every time I thought I was taking a different route she'd show up next to me a couple of controls later! It did help push me onwards a bit though.

Once I got to #36 I gave myself a turnaround time (I think I had about 50 minutes to go at that point) but I didn't stick to it and turned around earlier than I needed to, mainly because the other girl and another guy who'd joined our little party were turning around at that point. I could have at least got #49 and maybe #56 and then dropped #41 later on which was so steep it wasn't really worth it. I ended up crossing past the finish with about 17 minutes to go. Picked up the last 3 I'd left for a finishing loop and was home with about 9 and a half minutes to spare and nowhere to use them up! GRRR! But I ended up with 1020 points which was pretty good really and got me 2nd equal in open women which was quite good.

Can't wait for next weekend though...Slater Road rocks and we have a mountain bike rogaine in the afternoon. Gonna be awesome.