I used to hate rogaines and score events (same as a rogaine...but only an hour long), preferring to just follow the set course that regular orienteering provides but lately I've really started to enjoy them...which is fortunate since I have a 12 hour in Otago next month and am then doing the World Rogaine Champs in November which is a grand total of 24 hours long so you'd really hope that I liked doing them otherwise that's an epically long torture session (okay let's be honest, it's probably a bit of that too)!

Anyway, Counties was running a 3 hour rogaine out at Waiuku. There were 2 seperate maps...Waiuku Forest North and South, each seperated by roughly 3km of road. North went uphill, South went downhill so each had pros and cons but it did make planning interesting as getting from one map to the other was not going to be quick. I was in a team with Cath and her partner Andrew who were heading off to Vanuatu the following weekend for an adventure race. Needless to say I was extremely jealous (it even has a snorkling rogaine...I mean how cool is that?!). Anyway, Cath wasn't feeling 100% so we were never going to be going super fast but that suited me anyway as my knee hadn't been that great all week! 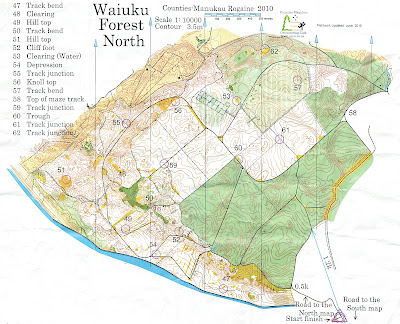 The executive decision (Cath and I...Andrew doesn't do maps) was that we'd tackle the North map first and see how we went from there. I think we planned out a pretty good route to get all on the North map and they were really pretty easy controls. We probably started off a little fast for Cath but we all got into a good grove after a while. They are great fun to race with! Apart from forgetting to pick up #54 and having to race back down the road from #49 to get it, everything was pretty simple and straight forward and we got through our planned route quite a lot quicker than we expected. 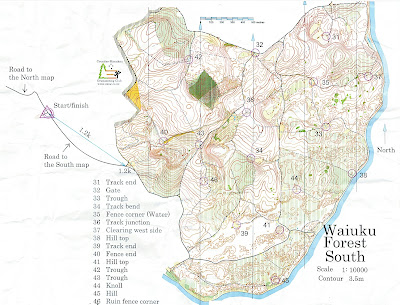 The 3km down the road to the South map really took its toll on my knee injury from last weekend and I started to struggle. We hadn't really planned too much on this map as we really didn't expect to get through everything so fast but after a quick discussion I think we had a fairly good route planned out. If it wasn't for my knee and Cath feeling a bit sick, we would have pushed harder and tried to get a few more but it just wasn't worth it under the circumstances. We ended up coming in nearly 15 minutes early as I just didn't know how long I was going to be able to keep going without causing damage but it turns out we definitely could have at least go #46 on our way back. Oh well!