He could not accurately have told anyone how he passed the next several hours. He was lost in his own creative reverie. In a rapid hand that skated across the white paper like a bird landing on water, he mapped out his scenery
- The Final Act of Mr Shakespeare by Robert Winder
About this time last week I fell asleep at my desk but luckily today I am much more awake! 5:40am flights are not fun.

Anyway, it feels like a lifetime ago now but about a week and a half ago now (?) I flew down to Christchurch for a race in central Otago. 10:30pm is quite possibly the latest I've ever had dinner but my plane didn't land until after 9:30pm and then we had to go pick up some gear from B's house. I think I was getting to the point of wanting to eat my hand by the time we finally got to M's house but it was okay because he had cooked me dinner! 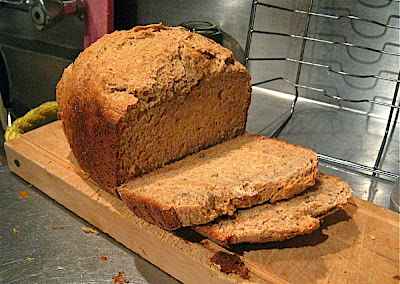 Homemade bread fresh out of the breadmaker (it was still warm!!) and pumpkin soup! 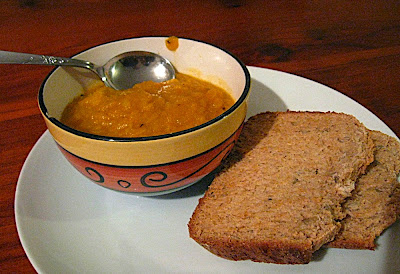 I'd made a double-batch of the Fudgy Wudgy Blueberry Brownies from Veganomicon...one of the batches went to my brother (because I am an awesome sister!) and the other was technically for M's sister to bribe her into picking him up from the airport the week before but of course we needed to do a taste test first! 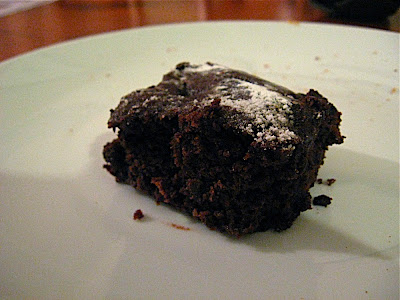 They were so ridiculously sweet and rich that I actually only managed half a piece which is saying something since I can normally finish anything sweet! But then again, it was, like, 11:30pm by then and such a late dinner really screws with my appetite. But in saying that, they were certainly delicious and I hear via the grapevine that M's sister has polished them all off.

Naturally we ended up sleeping in for ages the following morning so I was practically ravenous by the time I awoke. We had planned to go to The Orange Tree for breakfast but it was shut due to minor earthquake damage so we trooped off to Cathedral Square and made it to The Lotus Heart just in time to make their cutoff for the breakfast menu.

First up...drinks. I wish I could remember what my juice was because despite being bright green it was seriously delicious. M ordered some berry smoothie...I just love the bright colours. 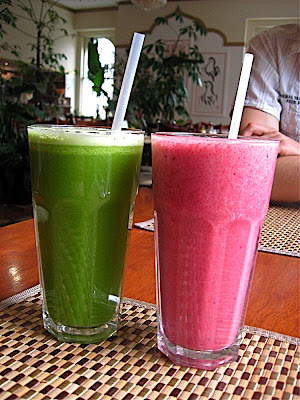 I really wanted the Flax-oat French Toast which was really delicious and super filling. 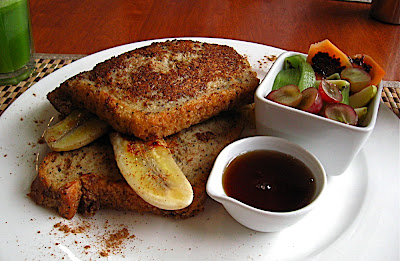 M's choice was the Raw Cacoa Crepes (at least I think that's what they were). The crepes were made with cacoa and zucchini apparently and filled with all sorts of fresh fruit. 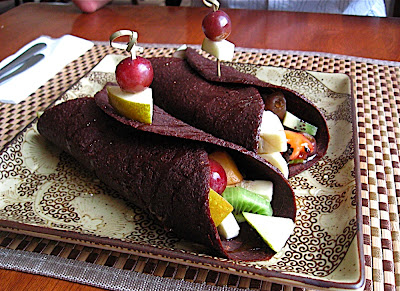 On first glance I swear the crepes look like they're filled with lollies! But I'll be honest here, we both found the crepes to be far to rich and chocolatey for breakfast (I can't believe I'm saying this!). A single one of these for dessert would be amazing but it was all a bit much for breakfast.

After breakfast (we'd reached midday by then!) we went for a wander around town (or the parts of it we could access) to see some of the earthquake damage. To be honest you couldn't see all that much in town because many of the roads looked like this... 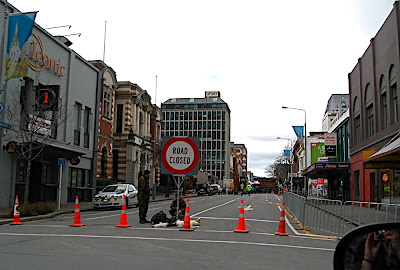 There were army trucks and police cars everywhere (this was nearly a week after the first earthquake but Christchurch is still being hit by aftershocks). 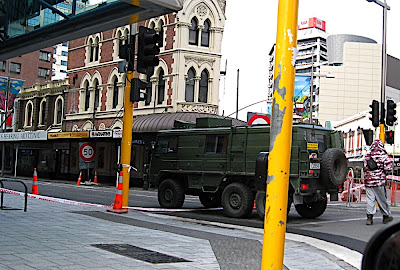 When we parked our car to go to breakfast we passed this building below. Its whole roof had collapsed and tried to escape out the window. There are buckled buildings all over the show. 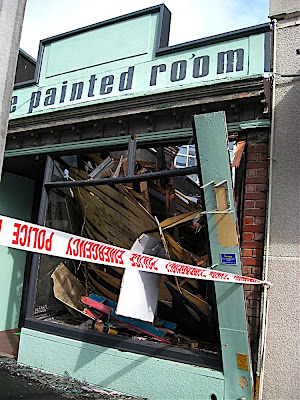 Each building you pass in town has a piece of paper taped to it describing it's current state. You don't want to find one of these red ones on your building. 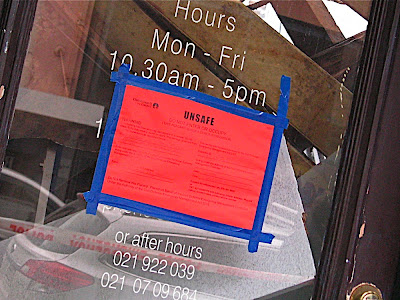 We didn't head out to the south where a lot of the damage is as we were running a bit late and needing to head off on our journey into central Otago for the weekend. Thankfully I only felt a couple of aftershocks while I was in Christchurch but the low rumbling sound before the house started shaking is really quite scary.

Anyway, this post is already quite long enough so the rest of the adventure will have to wait...