‘The idea is much too big for my little head.’
- Sophie’s World by Jostein Gaarder
M and I moved house last weekend so now we have somewhere of our own which is terribly exciting. I mean, I have a fancy big fridge all to us and a kitchen that I can arrange any way that I like! And, at last, my cooking inspiration is slowly starting to come back again after what feels like forever (months? Years even?).

But our first meal at the new place was Hell pizza on the only furniture we’d moved at that stage...a table with a couple of chairs! I like to customise the Sinister pizza (which is naturally vegan but mixing the toppings up a little is always fun) and if you get the big one then you have leftovers for the following night when you’re too tired from moving to even contemplate cooking something proper. 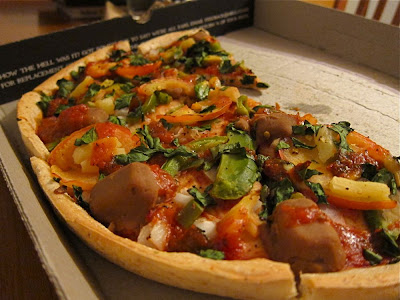 The first meal I actually cooked though was pretty boring but still delicious, tofu stir-fry with turkish bread. Always a good safe option especially when getting used to a new kitchen. 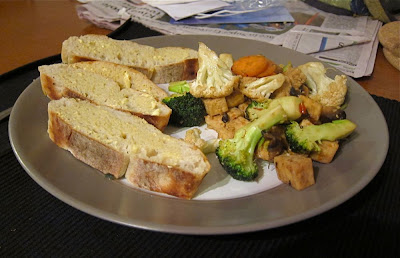 I think I spent half the time trying to remember where I'd put everything and getting used to the fridge being in the laundry. Sounds weird but it actually works fine and that means we have more space in the kitchen.

Next up is a rice and veggie casserole which is based on the Cheezy Broccoli and Rice Casserole from The Ultimate Uncheese Cookbook. I liked the concept of this and the taste was pretty awesome too but there was far too much rice to veggies even though I had added more veggies than the recipe originally said. Although I didn't have a cup measure and I think the cup I used for the rice was, well, definitely larger than your average! But still, it definitely needs some modification to reach a level of awesomeness! 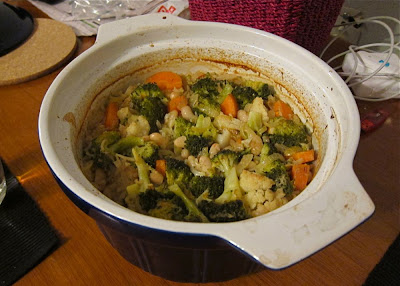 Yes, it looks quite good in the photo above but the veggies (and beans) are all on the top and the rice is all underneath in a thick mass.

Another night I made a delicious wintery scone-topped casserole (you can tell it's pretty wintery round here by these last two dishes...-3 the other morning when we biked to work!). This has to be one of my favourite winter dishes and you can make it with pretty much anything you have on hand. 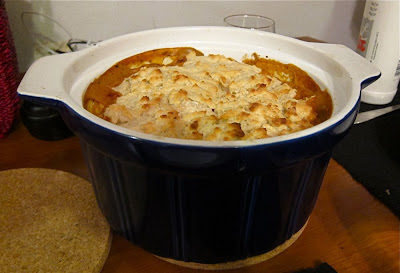 The casserole part of this dish has onion, carrot, cauliflower, celery, pumpkin and tinned sweetcorn with a tin of butter beans and a creamy sauce (pretty much just oat milk, flour and sweet chilli sauce). You cook all that up then dollop spoonfuls of scone mixture on top and bake for about 15 minutes at a super hot temperature. Voila, an awesome winter dish that is also brilliant the next day or even frozen. 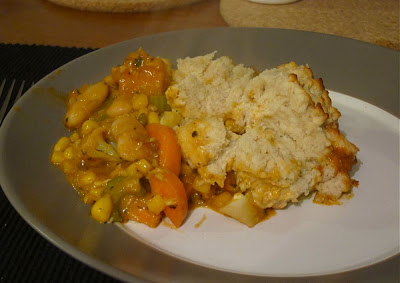 Anyway, that's enough food for now. I am so tired! It's been so busy since moving and last night we had M's parents over for an awesome feast (which I will blog about shortly) and today we went for a lovely bike ride (route is here) so I feel about ready to fall asleep on my seat. I wish we had a couch!

Oh, and for anyone interested, our new flat is in the white zone which means it hasn’t been assessed yet but I can’t see any reason for it to be classed as orange or red so I think we’re pretty safe. It’s got the usual cracks that every house in this city now has but it all seems pretty superficial. If you are interested, there is more information about the zones here. It is about whether the land is safe to live on rather than whether the structures themselves are safe (that’s different again - but appears to have a similar colour scheme as far as I can tell).