Generation succeeds generation, but there is a fool walking the earth who is never ravaged by time.
- The Solitaire Mystery by Jostein Gaarder
Random note before I begin...as this site is displaying at the moment there are 3 pieces of vegan chocolate cake within about 5 posts...does that say something disturbing about my diet?!

Dinner was at The Chef's house the other night. I had devoured a rather intense hot chocolate that morning (hot soy milk and 2 big slabs of dark chocolate courtesy of the cafe across the road from work who made it specially for me since they weren't sure whether I could have their normal hot chocolate or not) so I was feeling the need for veggies and hoping he would provide. 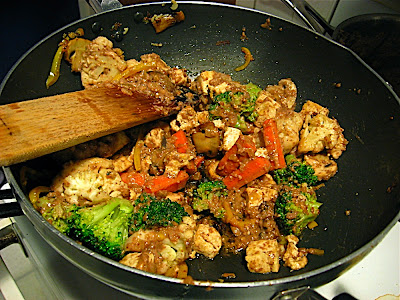 This was cooking on the stove when I walked in...stirfry veggies with tofu and satay sauce (he even roasted and crushed the peanuts...ah). Pretty much my perfect meal. I suspect I am quite easy to please though. 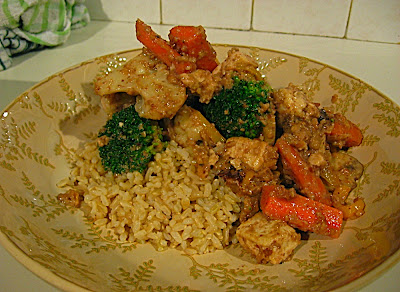 After dinner we went to a talk by Don Tolman. Neither of us had heard of the guy until a couple of days before when he was on bfm (I was on my way to the supermarket from work when I heard him talk) but we were both intrigued. It was interesting but sometimes he talked in these over-the-top funny voices which annoyed us. Anyway, when we got back The Chef heated me up one of his awesome apple pies...I am seriously addicted. There could be worse things to be addicted to... 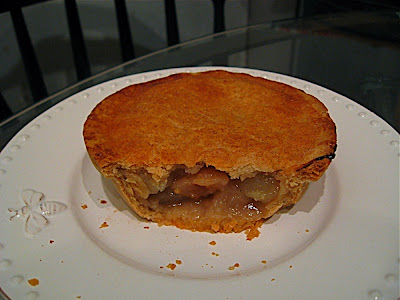 This is a pie from the second batch which wasn't quite as good 'cause he was trying something different with the pastry but by 'not quite as good' I mean still seriously amazing. I was told there is only one pie left now. This is a sad thing (especially if that pie doesn't make it into my tummy).

In the morning The Chef made us porridge with wholegrain oats, banana, maple syrup and walnuts (brain food according to Don Tolman and my brain does need some extra help). 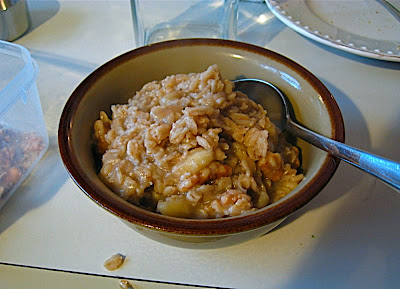 It's been a while since I've had porridge but it was definitely the perfect weather for it (raining, cold, just generally miserable winter weather). I polished mine off with some awesome ginger tea I found on his shelf.

He then had to rush off to work and I had to rush off home to start the baking extravaganza which is making a train cake (more on that next time) but he sent me off with some homemade 6-grain buns for lunch. 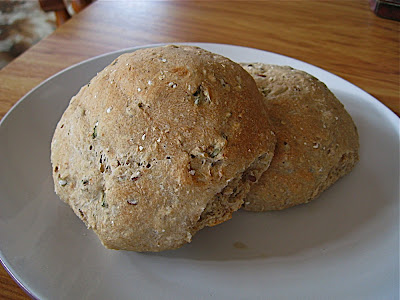 Ah, everyone should have their own personal chef to take care of them!