This was the final race of the sprint series but the only race I've been around to do. Sprints have never been my specialty but the actual courses can be quite fun. Unfortunately my knee was not feeling that great after my warmup so I knew it wasn't going to be fast and I could definitely feel the effects of a fair amount of cycling on my thigh muscles! But at least the knee wasn't actually hurting which is good.

Not sure my brain was thinking quite fast enough but it didn't go too badly. I did manage to overrun #4 which was really just plain silly since it was such a simple control but the scale (1:3000) took some getting used to. Then I took a bit of a weird route to #7. I hadn't been paying attention to where I was going to get through the buildings and it was a bit late by the time I realised I was taking the long route (no time for backtracking in a sprint!). 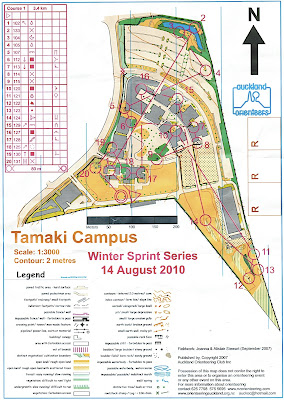 Some of the paths and stairs were super slippery which was a bit scary and then it was quite muddy once you got on the fields which was rather entertaining (sliding round into #3 was fun!). I mucked around at #12 as the control came up so fast that i got confused then by #14 I'd lost all speed (if I'd ever really had any to start with) and it was a bit of a drag to the finish but it was a cool little course.

I'm not sure if I'd call 3.4km a sprint course but it was definitely a well set course especially for such a ridiculously tiny map. Although you crossed back over youself time and time again it never felt like you were rerunning places you'd already been. Wish I'd been able to go to more of these 'cause it was fun.