A parcel, taken from one place to another, handed from one owner to another, unwrapped and bundled up at will is all that I am.
- The Red Queen by Philippa Gregory
So many things to talk about!! But because I can't decide where to start we'll just focus on dinner last night...

M went to the fruit and veggie shop after work and came home with a huge bag of capsicums so naturally there was only one thing to do (okay fine, I’m sure there were lots of things we could have done but only one came to mind at that point), stuff them.

It turned out rather delicious so I thought I’d attempt to give you the recipe...but then I realised that my cooking method is very much the “bit of this” and “handful of that” approach so these amounts that I’ve made up below are probably hopelessly incorrect! Oh, and you end up with more mixture than required but then again you can always make more or just eat the mixture by itself. It's quite tasty. 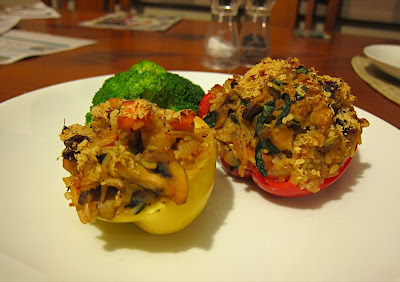 Stuffed Capsicums
Serves 4 (of us...don't know about you guys though)

In a frypan, heat some oil and fry the onion. Add the mushroom and cook for about a minute then add the cumin, paprika, coriander and basil and cook for another minute. Add the carrot and tomato and fry until almost cooked then add the chickpeas, spinach, pumpkin seeds and sweet chilli sauce. You can add salt and pepper at this stage too but we tend to add ours individually when dinner is served. Take off the heat.

Add the cooked rice mixture to the chickpea mixture and mix together. Spoon the mixture into the halved capsicums until basically overflowing (you can pile it quite high and press it in). Sprinkle some yeast flakes (savoury yeast) on the top of each one.