Sugar to break your teeth on

He had raised taxes and burned a few villages on general principles, just to show everyone who they were dealing with. It didn't seem to have any effect.
- Wyrd Sisters by Terry Pratchett
Yeah well, sometimes (always?) I'm not too good at this blogging thing! I am getting really good at forgetting to take my camera along when I go and eat awesome food. Take today for example. My lovely cousin D and I went out for lunch at Kokako today and I had a really delicious tofu scramble...and it looked really beautiful too. The light coming through the window in the cafe was perfect as well so it would have been a great photo. But I didn't have my camera so you'll just have to imagine it...even though I haven't exactly been very descriptive of it either. I guess you'll need some imagination (make it up, it's okay...pretend it's the tofu scramble of your dreams. It wasn't but that would make for a more exciting story).

Anyway, I do have some food photos so all is not totally lost!

A few weeks (months?) ago the Safe store on K'Rd started selling the Go Max vegan chocolate bars everyone's been talking about (everyone being a very loose term). Anyway, they were heinously expensive so I just picked 2 to try. 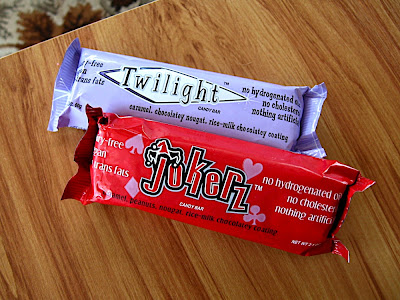 I ended up picking the Twilight and the Jokerz (can't pass up something with peanuts!) but decided I'd wait to try them until I really felt like one rather than just because they were there. Of course, I never felt like one when they were around but I craved them at times when I was away from home (mostly when I was in Otago in the cold and in need of chocolate to warm myself up!) so they sat around for, um, ages?!

Anyway, I thoughtfully packed one for my recent trip to Queenstown and low and behold, those chocolate cravings came so I finally got to try one! 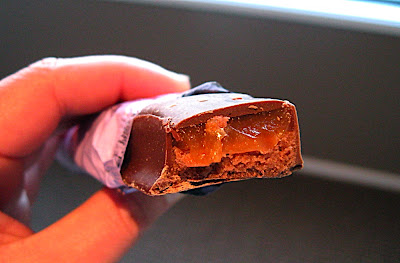 The Twilight bar is supposed to be like a vegan version of the Milky Way bar or something like that. I wouldn't know. It was good as far as a super sweet chocolate bar goes but it appears my taste buds aren't such fans anymore which was a bit disappointing. I found it so sweet that it felt like it'd crack my teeth.

So yeah, I'd give you my view on the other Jokerz bar but I suspect it might sit around for a little while yet before I feel like a sugar hit to break your teeth on.

But food that I have enjoyed (I can't believe I'm implying that I didn't enjoy a chocolate bar - what's with that?!)...

Now that we've made it to winter, Blue Bird has started serving up soup again. I am a real sucker for a good, thick soup when it's cold outside. 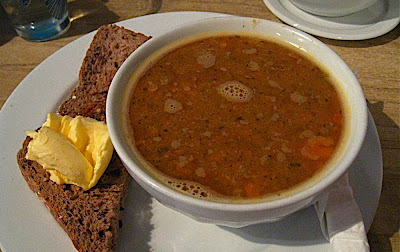 I can't remember what kind this one was (split pea and something maybe?) but it was delicious. Yep, that's a rather ridiculous amount of olivani they gave me for the bread!

They also sometimes have my favourite...the tofu, spinach and kumara chip pie (or whatever it's supposed to be called). I keep promising to make this myself (we have a couple of their cookbooks lying around our flat that have the recipe) but I'm slack. So I get all excited when I see this pie sitting in the cabinet waiting for me. 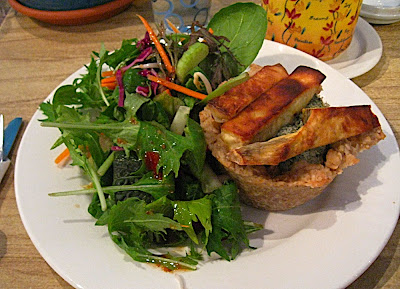 This time it was the last one left...clearly my lucky night. I do think I repeat myself sometimes...I'm sure I've blogged about this pie (among many other things) over and over again. Guess that means I must really like it!

And they served my tea in the most adorable cup ever...it even has a lid on it to keep it nice and hot and I liked how they left the tea bag in...'cause I like my herbal teas really strong! And to finish up ('cause I still had a sweet tooth craving something...), a ginormous piece of vegan chocolate cake. 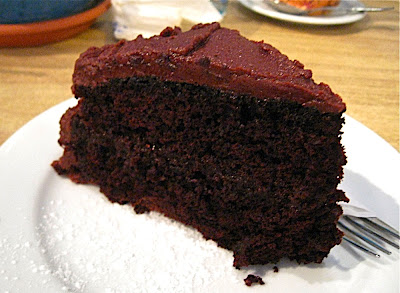 They served it with vegan vanilla ice cream on the side which was a bit of an overkill really (I mean look at the size of that thing) but it was very sweet of them since I couldn't have the cream they normally serve it with. My stomach survived.

Now, moving on to other food (I love Blue Bird but you can't eat there all the time)...how about a delicious vegan wrap/sandwich thingy from Harvest Wholefoods? I can't remember what was in it except for yummy things like hummus, roast pumpkin, baby spinach and sunflower seeds but I do remember that it was wickedly delicious. 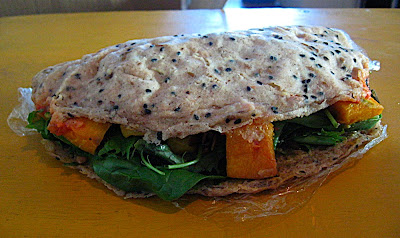 But I'm also quite capable of making my own awesome sandwich... 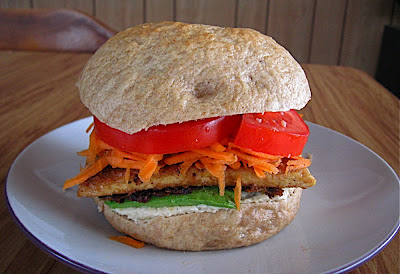 Fuel after racing...hummus, avocado, tempeh (marinated and fried), grated carrot and tomato all inside an organic spelt bagel from the bakery next door to Harvest. So, so good (there is something about homemade sandwiches that I can't describe. I like them...which probably went without saying!).

I think I might have had a bit too much sugar in my drink with lunch...feeling a tad hyperactive and scatterbrained. Oh dear! Anyway, that is all for today.