The Craigavon map is probably my favourite summer series map. It's deceptively complex despite being made up of tiny blocks of park with stretches of street inbetween. I was still not feeling that fabulous (still tired and had started feeling nauseous and dizzy quite a lot) but it's course 1 or nothing baby! As per last week, Owen, Allan and I turned up at the start together so we set off at minute intervals with me starting first. I made a few crazy mistakes and stupid route choices early on starting at #5 where I must have been standing right on top of the control but didn't see it so went searching for it!! Then I had a bad route choice to #8 which cost me a lot of time. 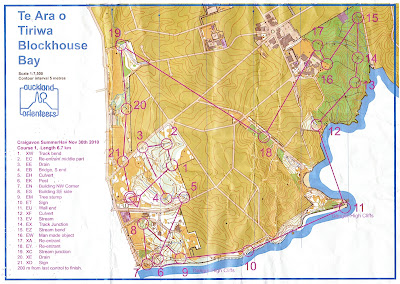 Allan caught me on the way to #12 so he must have made even more mistakes at the start than I did (turned out he had a disaster at #1) 'cause he runs a lot faster than I do. We ran together for a while which was quite fun. Together we had heaps of trouble trying to find #15 on the mythical stream bend...what stream bend?! Then at #17 he took off as it flattened out (he hates hills) and I was way too tired to even try and keep up. I still found myself walking most of the hills...and there were a lot but they are pretty steep. Lame but I think I'm not quite recovered yet plus I haven't done very much running in months! I did beat Owen by miles though!!