The last time I ran on this map (or at least the Epsom campus bit) was a Nationals sprint race a couple of years ago. My big memory is that it is a maze of buildings and impassable fences! It was blisteringly hot, even in the early evening and there were a lot of street legs to make up the distance on course 1. Fun times. As usual, Allan, Owen and I all turned up around the same time. Allan was first, then Owen and I started about 2 minutes after that. Got confused in the buildings on the first control which is always a brilliant start but things picked up after that and I had caught up to Owen by #8. 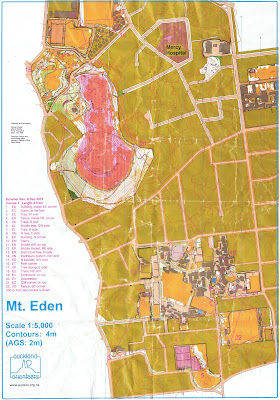 We both proceeded to run round in circles for the next few controls with the buildings causing a little bit of grief! Then it was a long leg out to Mt Eden. #15 wasn't in the right place so the group of us that had eventuated at that point just gave up and headed off to the next one. That happens at these events sometimes and it's really not much point bashing around for too long if you know exactly where you are. It was then a bit more street and building nav then up the side of Mt Eden where I finally managed to break away from Owen again.

Another long leg to the final couple of controls which were in the web of buildings again (and again I didn't exactly have the best route choice). Oh, and then a sprint finish...I was pretty much dead by the end! Got a bit mauled by blackberry in one patch of bush which is always fun. The little kid at the finish who saw all the blood kept asking me if I was sure I was okay! So cute.