SummerNav is a series of orienteering events held once a week after work during the summer at various parks in the Auckland region. It's one of my favourite things about summer. Is that sad?!

I missed the first event at the Auckland Domain as I was still nursing my foot injury but thought I'd tackle the next event at Hamlins Hill. On Monday night I'd gone for my first run in 6 weeks, all of 10 minutes, and the foot seemed okay but I wasn't going to push my luck since I had an 8-hour rogaine in the weekend so opted for course 2 instead of the usual course 1. 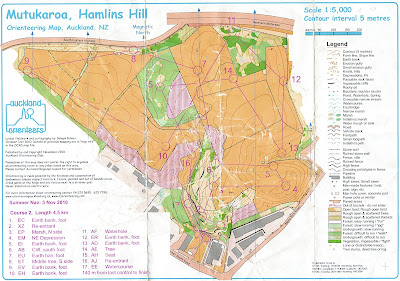 The ground is really rutted since it has cattle in it so it's real 'ankle breaking' stuff so running was tough and my foot wasn't too impressed. I tried to make sure that when I climbed the fences I landed on my right foot instead but it was weird because my normal climbing method involves me jumping down onto my left foot so I felt a bit unco. It was so cool to be out there running and orienteering again (orienteering on the mountain bike feels quite different) but I wasn't concentrating and made heaps of silly mistakes which is embarrassing because it was super easy navigation!

I thought I did terribly, feeling slow and orienteering SO badly (I was constantly worrying about my foot, feeling excited about running again and consequently not thinking about the map at all!), but everyone else must have done worse since I ended up doing quite well in the results!