This was the last SummerNav event for the year and also the last orienteering event for year...it's crazy how fast Christmas is arriving! Anyway, my street is actually on this map so it was always going to be a little bit exciting to have an event here. It also meant I got a nice little 5 minute warmup on the way to the event (and I was so hot by the time I arrived the thought of doing a course was a little crazy - humidity is going through the roof at the moment).

Unlike some previous events here, it was definitely a runners course which didn't really suit me. None of the usual scrambling around for ages in the bush wondering where the hell you were or the legs crossing over the river which either meant getting soaked or taking forever to go round. Oh well, still good fun. 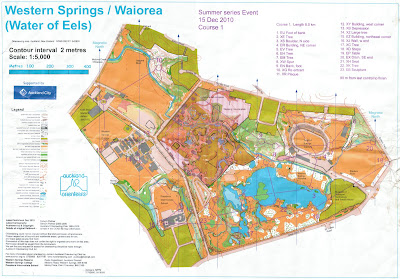 I didn't have any speed in the legs tonight (the heat and humidity probably played a big part) but at least I could keep running. The first legs were around the lake then we went into the stadium where there was a rather cruel control at the top of the hill. Then #8 and #9 were in the dodgy bush bit that really needs remapping. Then it was off to the other side of the map with some fairly straight forward legs through a couple of schools. Then it was back over to the far side of the map and a quick loop round the lake.

I felt really slow but managed to cover the ground a bit quicker than expected. Felt like I was melting out there though. Now to start some proper running training for next year!