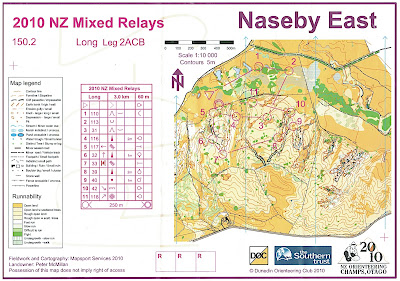 Easter Sunday was the National Long Distance Champs, also known as the classic distance. So the first ever W21E long distance race I enter has to be the longest distance I've ever seen for a women's course in New Zealand (although I could be wrong). 10.8km. Distances of orienteering courses always throw your average runner. This is not a 10.8km run. This is 10.8km along the straight line of the course. You have to find the best way between each point and normally this is not the most direct route. Trust me, this is no easy feat. You will run a lot more than the distance given.

Anyway, it had snowed on the hills overnight and it was freezing which didn't bode too well since the terrain looked to be very open and very exposed. I had to keep jogging on the stop at the start to keep warm.

I got a little confused on my way to #1 'cause there was a fence marked on the map (fences are normally left off the harder courses)...what was that doing there especially 'cause I could definitely see fences that weren't on the map too. Weird. It seemed too easy but it was my control so hey, I'm not complaining. Went a bit too far and too low down to #3 which was frustrating and meant the girl behind me caught me up. #6 - oh dear. It was on a boulder in a fairly feature-less area and I went too far and found about 3 other controls which weren't mine. I started heading up to relocate but spotted it. Everything went pretty well after that for a while (apart from climbing a barbed wire outrigger fence and getting my tights and the elastic on my sport ident stuck to it). 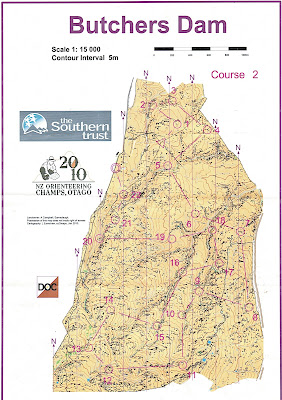 I was so glad I'd stuck a clif bar in the back pocket of my tights 'cause I was hitting the wall by #12 which was thankfully a drinks stop too. Still orienteering okay until my stupid route choice to #16 where I decided to stay on the left side of the river. Not a good idea and getting across to the other side proved difficult because of the cliffs. Then I went too far and had to go back. 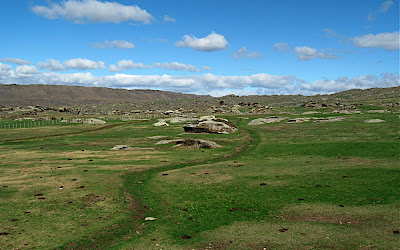 From the finish looking out over the terrain. It was flat near the end so this photo is deceptive but the course went out to the tops of those hills you can see on the horizon.

The rest of the course was okay but I was shattered. A long course after a long weekend after 2 really hard weekends previously. I had to walk most of the climb from #18 to #20 which was frustrating because they were easy controls. Nice to have people cheering me on to the finish at the end though and it felt like quite an achievement to finish.
orienteering, long, nationals

The second day, Saturday, was the National Middle Distance champs and let's be honest here...arriving at the event centre I was feeling pretty intimidated. There were these huge cliff faces stretching across the terrain and in the distance we could see the odd control flag. Plus it looked steep, rocky and intense! I warmed up with a few of the other elite girls while trying to remain calm. It was hard, especially when we saw one of the early W21E girls heading up some rather steep hill straight from the start triangle. 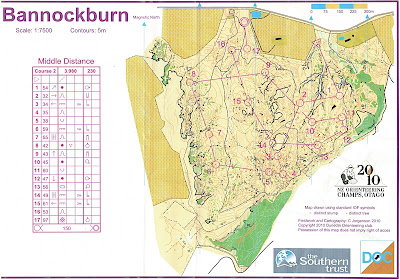 Actually, the first control wasn't too bad except for trying to find a way up amongst the clif faces and the adreniline got me up the hill. Fairly easy control too thank goodness. I struggled a little on #2 'cause I got confused with all the little valleys I seemed to cross that I couldn't see on the map. Found the track and worked backwards.

The next few were okay due to the fact that there were giant cliff structures to navigate to and around. Then came #6 where I ran up the wrong valley and got stuck in some gorse. #7 - don't follow anyone even if you know they are better orienteers than you, especially if you think they are wrong. They ran up towards the major cliffline and I nearly followed them all the way up before thinking that looked so wrong that it wasn't funny. It was further over like I thought. 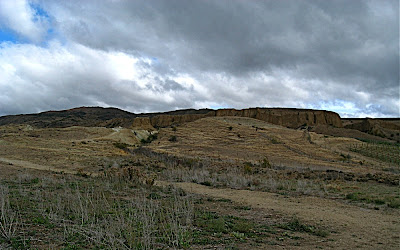 After that I upped the pace to keep in touch with the other elite girl and some of the M20A guys. The controls weren't too hard but it was pretty physical and I was tired. Controls were fine apart from a bit of a shaky #13. But on my way to the finish I almost missed out #17 (the final control). What was I thinking!

Wicked terrain and fun course but I had my brain and my legs switched off for too much of it. Damn. 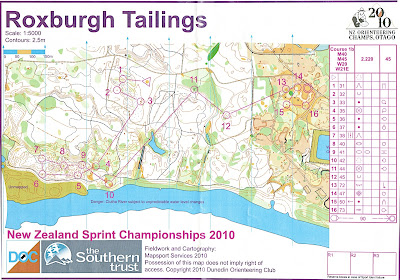 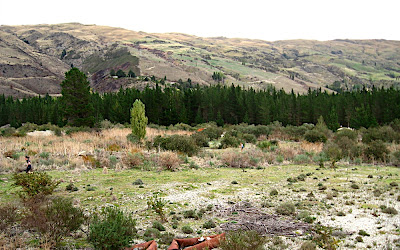 Looking down over the last few controls from the spectator area
sprint, orienteering, nationals