"Come, come," said Venables. "I really can't go along with this modern playing down of th evil as something that doesn't really exist. There is evil. And evil is powerful. Sometimes more powerful than good. It's there. It has to be recognised - and fought. Otherwise..." he spread out his hands. "We go down to darkness."
- The Pale Horse by Agatha Christie

About a month ago someone (oooo, that was me, pick me!) had a very important birthday (well, all birthdays are important, but some are more important and exciting than others). And what do birthdays always call for (well, in my world anyway)? 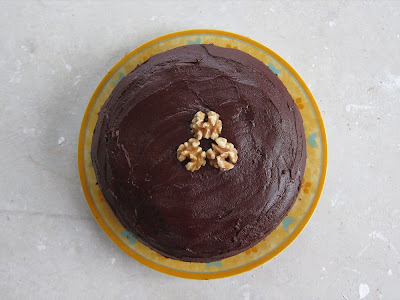 Why yes, that is a dirty concrete floor. Thank you for noticing.

CAKE! The chocolate cake from Bhakti Cookti Bookti in fact. It was so ridiculously rich and chocolatey that we had to eat it with ice cream lite licks hokey pokey is the BEST!). Not exactly surprising considering it basically has an entire large block of chocolate in the icing!

After the usual wintery Wednesday Night run (basically a group of us meet up on a Wednesday night to go running in the Port Hills together) M and I tempted everyone back to where we were staying to help devour the cake. Cake is pretty much the perfect post-run food right? 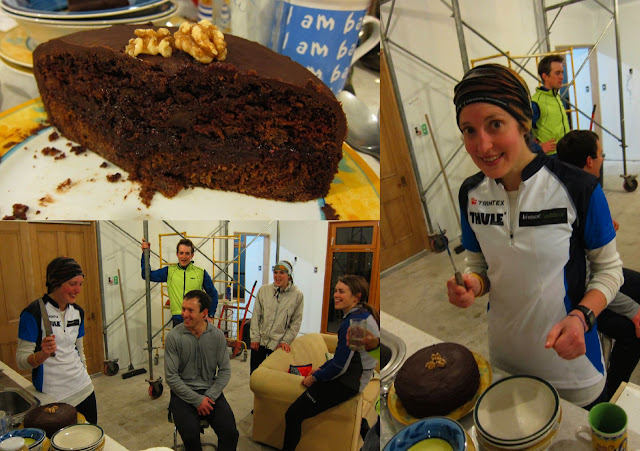 The cake is filled with delicious jam as well as copious amounts of chocolate icing. Yum!

In case anyone was concerned (although I can't see why) M and I did actually eat some real dinner which even included vegetables! 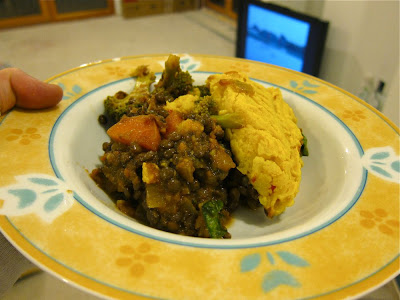 "You are better than I am," Inigo admitted.

"So it seems. But if that is true, then why are you smiling?"
"Because," Inigo answered, "I know something you don't know."
"And what is that?" asked the man in black.
"I'm not left-handed," Inigo replied, and with those words, he all but threw the six-fingered sword into his right hand, and the tide of battle turned.
- The Princess Bride by William Goldman


As I've mentioned earlier, there have been a lot of birthdays lately (a lot of leos around obviously!). This last weekend we had two in a row and I was baking for both!


Although technically not until the following Tuesday, my cousin D celebrated her birthday on the Saturday with a family dinner. We made the trip across the bridge in the wonderful wet winter weather we're having here at the moment. I helped D whip up a batch of good old Mac and Cheez which always goes down a treat as she'd always wanted to try it since I'd mentioned it to her. 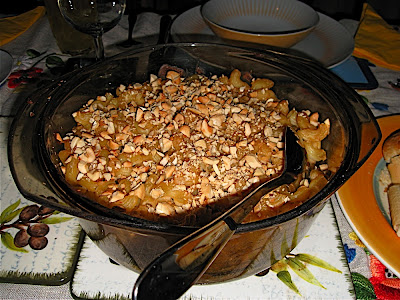 I was in charge of D's cake but I just couldn't decide what to make. In fact even when I had decided, I changed my mind a bit once I got in the kitchen. So perhaps a marble cake is a perfect cake for indecision! This is basically the Black Forest Chocolate Cake from the good old Damn Tasty Vegan Baking Guide (yes, again!) but I decided to mix it up a bit. Dividing the ingredients in half I added cocoa to only one half of the mixture (balancing it out with a little more flour in the other mixture) then added chopped dark chocolate to the dark mixture and white chocolate chips to the white mixture. Drop spoonfuls of the mixture into your baking pan then swirl it a little with a fork and hey presto, marble cake! 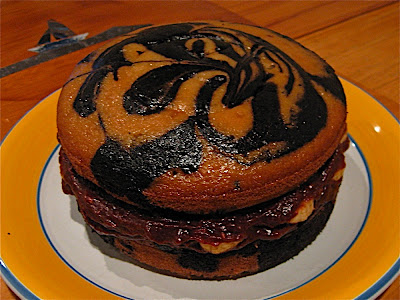 I blended up a tin of strawberries (didn't even know they existed until I found them on the shelf) and thickened it up with cornflour then added some melted chocolate and peanut butter and spread the mixture thickly between the layers with some good old chopped banana. It was very well received!


It was a pretty exciting night as we spent all evening after dinner watching the Olympics and screaming at the screen as our rowing team raced. We were hoarse and shaky after cheering on the rowers then gobsmacked as we made it to the gold medal race of the men's pursuit and very nervous over the women's shot-put. But it made for one very impressive evening of Olympic watching. 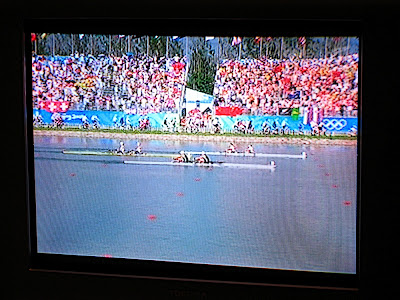 Here's the Evers-Swindell twins (they're the team closest to the camera) about to pass the German team and win by a ridiculously close margin. I don't know if you've been able to tell but we've been addicted to the Olympics during the past couple of weeks. I don't think I've watched this much television all year as I have since the Olympics began!


Anyway, the following day J's good friend was celebrating his birthday and J had suggested I make the Chocolate Peanut Butter Pie from Have Cake Will Travel I made a while back. When it actually came down to making it I realised I'd run out of cocoa for the crust so there were a few changes made (throw in some wholemeal flour and some toasted coconut and we're set) and goodness knows where you'd get agave nectar here so I tend to use molasses 'cause, well, molasses tastes yummy! 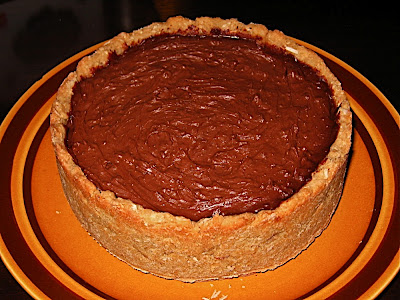 Since we've had so many birthday cakes lately the change to a pie was really refreshing. Plus it's a lot quicker to make and decorate than a cake. The only thing is that the melting of the chocolate (I do it in a pot over a saucepan of boiling water) can make one feel a little woozy as the wafting smell of chocolate surrounds you! 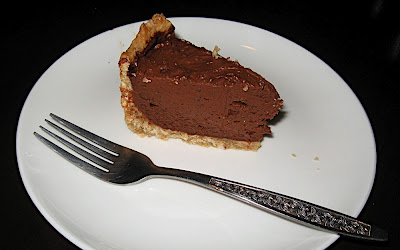 As well as birthdays, J and I had a little celebration of our own last week and J treated me to dinner at Sawadee. I had a red tofu curry which doesn't even seem to be on the online menu but it was delicious. The bowl was deceptively huge so I had to doggie bag over half of it! Of course that's never a problem since I can just have it another night! 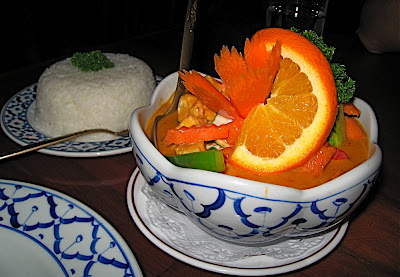 I think that is the end of most of the birthdays and celebrations around here for a little while which really will be quite nice since it can be rather exhausting having such a busy social calender. It's busy enough as it is!