Sometimes you just don't know what you are supposed to do
or who you are meant to be
or where you are
and the day seems to end the way it began.
- The Red Tree by Shaun Tan
Ooo, last day of OZ & NZ VeganMoFo...and I survived! It was fun but to be honest it's a relief we've reached the end! I haven't exactly had the best month and I certainly haven't made anything particularly interesting. I had all these good intentions but it just never worked out!

A lot is going on round here that isn't food related. I've got a few events coming up that I'm training for which leaves me feeling pretty exhausted and my arms feel dead from an epic climbing session last night. Today is also rather stressful at work after the news of the tsunami in Samoa as we've got a film crew heading over there in a couple of weeks. We're trying to work out what locations are still usable and what isn't and what on earth we're going to do.

Anyway, here's my lunch for today...couscous salad with roasted vegetables from Revel. 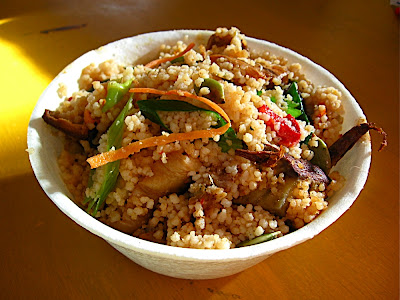 It wasn't one of their most exciting salads but it filled the spot and was still pretty tasty.

A few days ago I was having a really bad night and I couldn't think of what to eat. I didn't want toast or cereal and I had hardly any veges in my fridge. I didn't feel up to cooking anything and it also had to be something comforting. What to do? 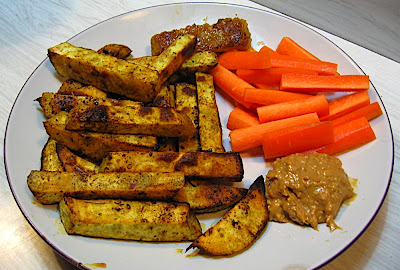 I ended up settling on cooking up some kumara chips (thank god for our convection oven), carrot chips and peanut butter. Not balanced in any way but if homemade kumara chips can't cheer me up then I don't know what will!
vegan mo fo, training, food, vegan cooking, life

If, as many of the Deep Voices believe, the darkness is just as much a something as is the light, then which came first after Nothing – the darkness or the light?
- Shadowplay by Tad Williams
Daylight savings began on Sunday over here in New Zealand which means I'm back to getting up in total darkness again but at least it's light for longer in the evenings. It also means we're on track for summer but you'd never know it if you looked out the window about now...

Anyway, below is a fairly typical dinner for me of late. Actually cooking something has been feeling like rather too much of a chore lately so there have been lots of lazy meals. I need to start being more creative again. 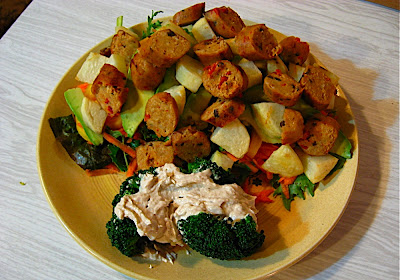 Another of my favourite meals that seems to crop up a lot on this blog is nachos. I like that I can make them from things normally found in my pantry (a tin of kidney beans and a tin of chopped tomatoes) and any veges rolling round in the bottom of the fridge. Plus I have a small addiction to corn chips! It also makes plenty for leftovers in the freezer which is always a bonus. 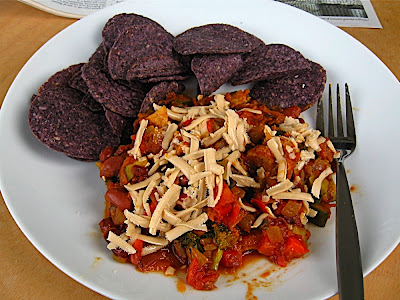 This was my lunch today (because I was so hungry by the time I finished cooking last night that I forgot to take a photo of it at dinner time...it was much more exciting because I put it under the grill and everything...okay, maybe not much more exciting but at least a little bit). This batch was made with the usual kidney beans and tinned tomato (normally I use a mexican-flavoured one but I only had italian), onion, grated carrot, mushrooms, broccoli, courgette, capsicum, various herbs, chilli and curry powders, smoked paprika and some chopped up Veaty Bites chicken style chunks which had been in my freezer for, like, forever.
vegan mo fo, vegan cooking, life

She did not think she would sleep tonight. But if there was no sleep, at least there could be no dreams.
- Our Lady of the Snow by Louise Cooper
When I used to live at home I was in charge of making the muesli for our household. Basically I'd clear out everything I could find from the pantry and fridge that could go into muesli and make the biggest batch ever. Then when I first moved out I would come home every couple of weeks to make another giant batch with the deal being that Mum would let me take half away with me. But that was a while ago now...

This weekend, while I had the oven on baking another batch of Zucchini Spelt Muffins from Vegan Brunch (you should seriously make these...they are delicious), I decided it was high time I started making my own muesli again. It's always so much better than anything I can buy because I can make it exactly how I like it! 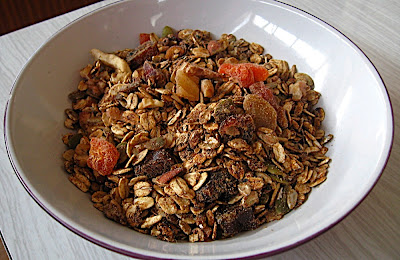 This batch has a mixture of rolled oats, wholegrain oats, rye flakes, walnuts, almonds, black and white sesame seeds, sunflower seeds and pumpkin seeds mixed with a little bit of oil and and a fairly large drizzle of molasses then baked in the oven on 180℃ for about 30 or 40 minutes (stirring every so often). Once it cooled I added some ground flaxseed and a mixture of dried fruits. Easy.
vegan mo fo, food, baking, vegan cooking, life

I pray that at last, as my long days draw to a close, I will have the chance to put right what once I did ill, that I will at last learn the truth. The truth will set me free.
- Labyrinth by Kate Mose
I am SO tired! Yesterday we had a fun 3 hour night rogaine event round some of the local streets and I didn't get back from that until pretty late and then I got up for spin this morning. I'm very much in need of a nap right about now. 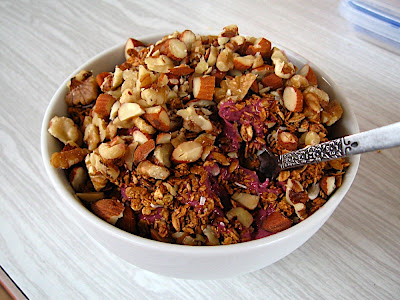 Anyway, after my superpowered breakfast I had to race into town to meet Mum to go check out the Rita Angus (a well-known New Zealand artist) exhibition at the Auckland City Art Gallery. After wandering round the display for about 2 hours (and debating which were our favourites and where we would hang them if we owned them!) we were famished and in need of lunch.

Revel delivered with both of us ordering the Vegan Reveller. 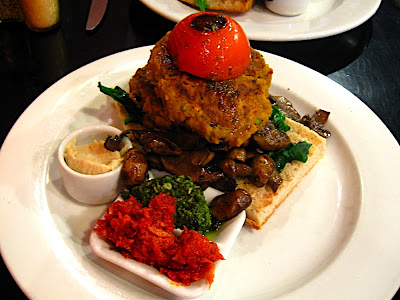 How can you possibly go wrong with a huge plate of giant falafels with grilled tomatoes, mushrooms, spinach, hummus, sundried tomato and basil pestos all served with lightly toasted bread?

Despite being so full after all this food that we could hardly move, dessert had to be ordered so we grabbed a couple of slices of the Peanut Butter Cake/Pie/whatever to take away and managed to wander down to Albert Park to indulge. 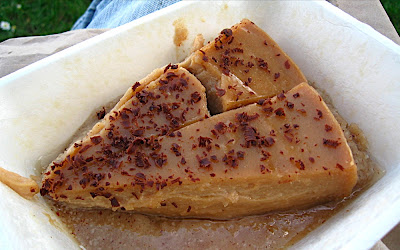 This is what all Fridays should be made of (in case you were wondering, that's two slices of cake/pie and no, unfortunately I didn't get to eat them both as I had to share with Mum!).
orienteering, vegan mo fo, training, food, spin, life

Madness slunk in through a chink in History. It only took a moment.
- The God of Small Things by Arundhati Roy
The spring rains have definitely been making an appearance over the last few days. Unfortunately they haven't been strong enough to get all the mud off my car so I guess I'm going to have to give it a real wash shortly!

Anyway, yesterday was an exciting mail day. Since I moved out of my old flat I have been without any tools for my bike and have been borrowing gear off my flatmate's Dad. Well, I finally got around to getting some of my own. We picked out a toolbox that has most of the stuff I need and ordered it off the web (good old Torpedo7...and it arrived yesterday! 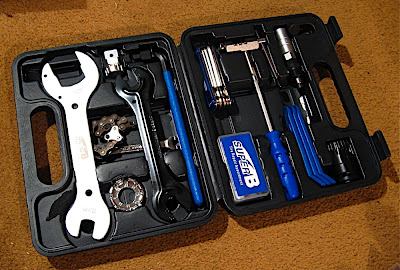 I also ordered a pump and a chain stay guard 'cause my other one went walking when I last took my bike in for a service but these things aren't quite exciting enough to warrant a photo so you'll just have to imagine them!

Also, to make yesterday even more exciting, last night I met up with my darling cousin D for our (almost) weekly dinner at Food Alley. We are creatures of habit and always head straight for the Claypot place and always order the same dishes. Mine is the Tofu and Vegetable Claypot and it is truly awesome. Quite possibly my favourite meal EVER! 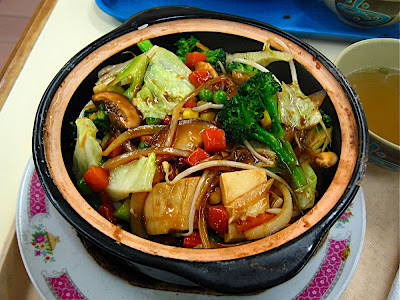 Yes, I've blogged about the claypot here before but it really is good! We also always get a freshly made juice each too...it's like this little routine we've got going. This time I picked a carrot, pineapple and apple juice. Divine. 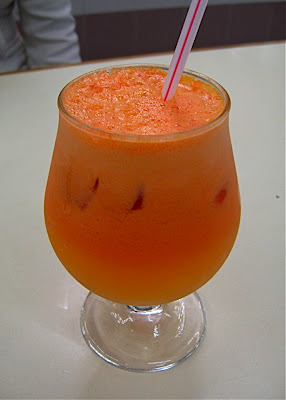 So all in all, yesterday was a pretty good day...
biking, vegan mo fo, food, life

I still remember how the room seemed to light up, though the sun had gone now, and its warmth with it.
- The Crystal Cave by Mary Stewart
So, yesterday was breakfast and today is lunch. But not just any lunch...leftovers for lunch!! I know I've mentioned this many times before but leftovers are quite possibly my favourite kind of lunches of all time!

Soup is always good 'cause you can whip up a big batch and then freeze it in single-sized portions ready for lunches during the week. It's also good because you can add leftovers from other meals like veges and tofu making it a double-whammy of leftovers! Oh yeah! 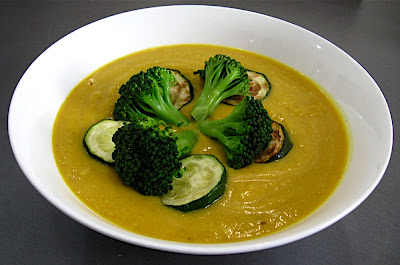 The dish below is satay tofu and veges with wholemeal pasta (although we keep being told to eat wholemeal pasta over white pasta it is notoriously difficult to find). After quite a while of cooking for 2 I'm still getting used to how much I need to make a meal just for me so I usually get a little bit carried away when chopping up veges...not that it's a problem 'cause it simply means I end up with, well, leftovers. 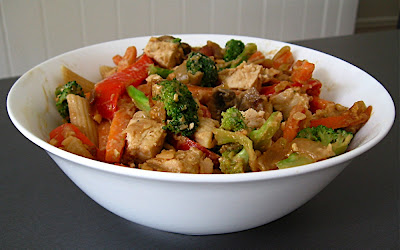 This dish is stir-fried veges and tempeh with quinoa. It made enough for 2 days of leftovers. Yay...especially because I absolutely love tempeh! I've had quinoa a few times before but this was actually the first time I got around to cooking it myself (sad I know because it's really delicious and I love the texture). I'm thinking it will be used a lot now. 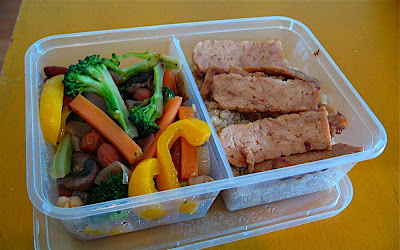 And finally...below is the leftovers from the day I went to Golden Age made into a salad with added grated carrot, dried dates, almonds, sweet chilli sauce, toasted sesame oil and tamari. Not a work lunch but eaten out at the forest...perfect. 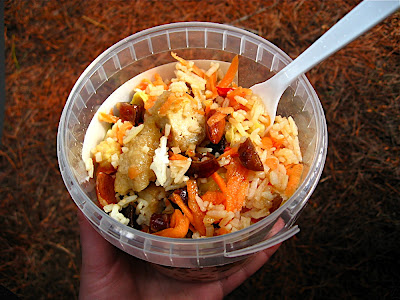 Naturally I even have leftovers in store for lunch today...Hell Pizza from last night after climbing and I can't wait!
vegan mo fo, food, vegan cooking, life