Take a tour of my stomach

It was not that he had lost his will to live. It was that his brain was so exact and cold a thing that when it told him that his life, for this reason, and for that reason, was within a few hours of its end, he had no faculties wherewith to combat its logic.
- Gormenghast by Mervyn Peake
In case you were concerned, I have actually eaten things other than cookies and rum balls (although I must admit a fair amount of indulgence in respect of the rum balls!). So here we go...

My flatmates were away for a couple of weeks not that long ago and left me a package of tempeh in the fridge to use up. I adore tempeh but hadn't bought any in ages so this was the perfect excuse to cook some again. For once I was organised and marinated it in the morning (okay, so I wasn't that organised but I was working from home so was probably trying to procrastinate!) and then baked it in our convection oven along with some kumara chips. 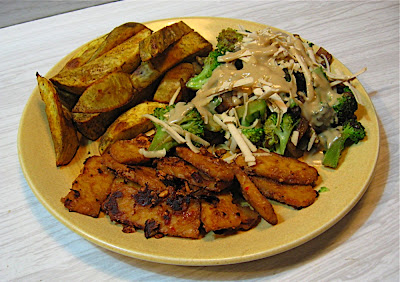 On the side I had some stir-fried veges. I grated some sheese and sprinkled that on top of the veges along with a drizzle of tahini. When such a simple combination tastes so good there's no real need to go making a sauce (in other words, I'm just plain lazy)!

This was dinner the following night. I'd cooked up a double-batch of tempeh and had some leftover kumara chips so I added all of that to one of my usual giant salads. 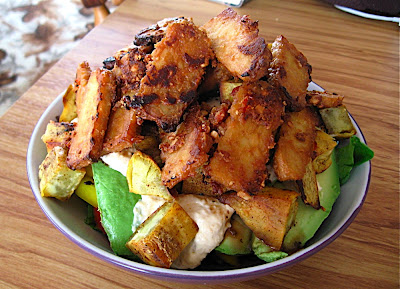 Yes, there are vegetables under that huge mound of tempeh! Ah, so delicious!

One night I had a girls night with my friend S and her darling daughter and she whipped us up some delicious vegetable wraps. 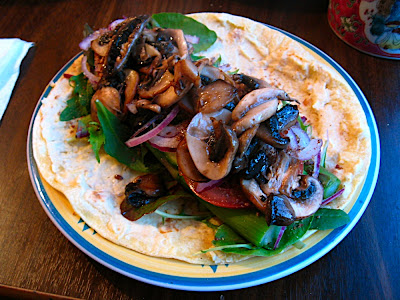 I filled mine with hummus, asparagus, mushrooms, red onion, lettuce, tomato and cucumber. It was so refreshing that I ate two of them! We finished our night with popcorn, strawberries and a good old chick flick! Oh yeah!

On a recent exploration of the local health food shop I discovered these random tempeh rolls (tempeh and vegetables wrapped in pastry) and, out of the curiosity that sometimes overcomes me in there, I bought a pack to try. I threw the package away before I made a note of the brand but if anyone's interested I can have a look next time I'm there. They were actually delicious and made a great light lunch with salad but they could have done with more filling and less pastry (or maybe that's just me).

A couple of weeks ago when B was up we decided to invite my lovely cousin D round for dinner. I'd been highly domestic the day before and cooked up a huge saucepan of chickpeas (note to self: I really should cook beans more often) so I decided we were going to have chickpea curry. The only snag was I had no curry paste so I sent B off to the supermarket on a mission to find some vegan curry paste. All he could find were pouches of Thai Kaffir Lime curry paste. 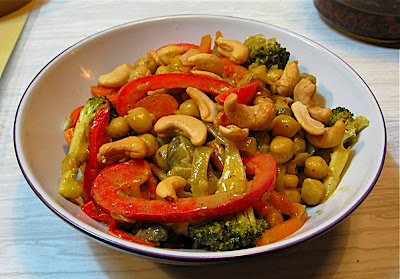 I used 2 of the pouches but it could probably have done with 3 although D still found it pretty hot. I must increase her tolerance for hot food! It was actually delicious so maybe I'll have to buy those pouches again. Pity none of the other flavours were vegan.

No post of dinners cooked at home is complete without a meal of nachos! What is it about nachos that makes them such a staple and should I be concerned?! Oh well, at least B enjoyed them too. 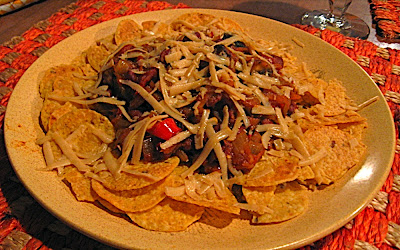 I keep meaning to try these with different beans (preferably some I've cooked myself) just to shake things up a little but I was lazy and used my usual can of kidney beans.

So I rather regularly have pizza as an after-climbing dinner with the rest of the climbing crew but it had been ages since I'd made it myself. I found myself trying to think of meals to make on a recent trip up to my beach house and decided pizza was an excellent idea. Being a little lazy I bought the bases so they weren't as awesome as usual but still pretty good. 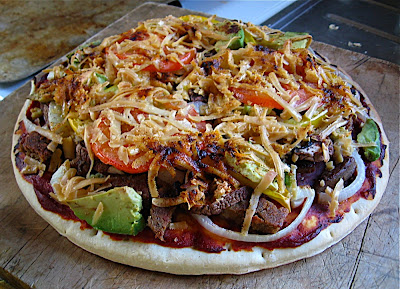 I pretty much used any toppings I had on hand (a base of tomato paste topped with mushrooms, capsicum, onion, tomato, avocado and sheese as well as cooked, chopped Bean Supreme burger patties which I'd found in my freezer at home). SO good.