Take me to the market

The death moment was at hand now. Again and again Inigo thrust forward, and again and again the man in black managed to ward off the attacks, but each time it was harder, and the strength in Inigo's wrists was endless and he only thrust the more fiercely and soon the man in black grew weak. "You cannot tell it," he said then, "because I wear a cape and mask. But I am smiling now."

"Why?"
"Because I'm not left-handed either," said the man in black.
And he too switched hands, and now the battle was finally joined.
And Inigo began to retreat.
- The Princess Bride by William Goldman


Apparently it's spring...try telling that to the weather. It's pouring with rain, the wind is wild and the temperature has dramatically dropped again! But we did manage to squeeze in one week of spring before the bad weather hit again!


J and I decided to escape the city for the first weekend of spring when the weather was actually nice and test our bikes out at Tawharanui Regional Park, over the hill from my family's beach house at Wai Kauri Bay. But first, we had to go and explore the Matakana Farmer's Market. Despite being only about 15 minutes drive from the beach house I have only gone to the market a handful of times. There is heaps of fresh, organic vegetables, homemade chutneys and james, fresh bread, oils, wine...lots to see and taste. 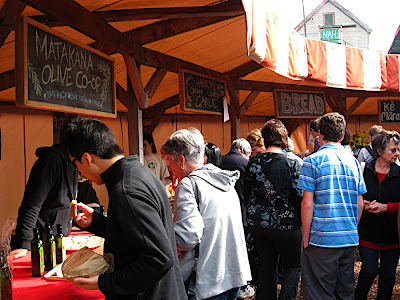 We explored the river's edge while savoring sorbets in the first warmth of the spring sun. J was determined to find the killer eels that the sign post promised but we had no luck! 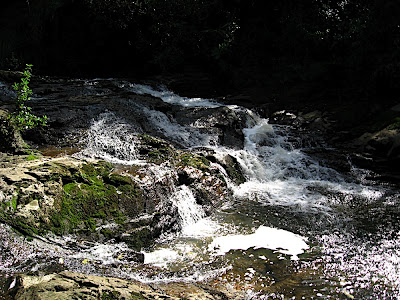 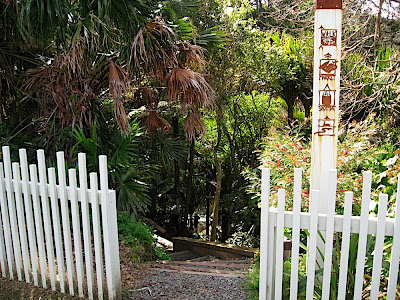 A little further down the road is the Matakana Country Park Market. Mum always gets sidetracked here with all the garden sculptures and art. Look at what we found at the market..a buzzy cow!! Classic! We also reverted back to childhood and played with toy blocks! 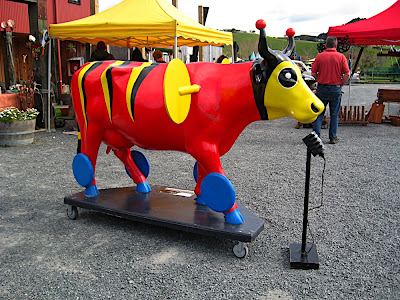 So what did we pick up at the farmer's market in the end? 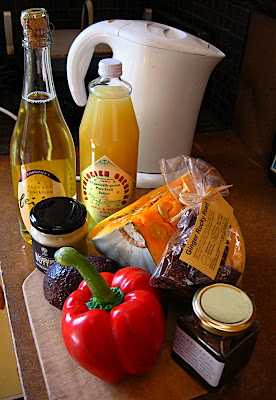 Here we have feijoa wine, feijoa and apple juice, organic macadamia butter, an organic pumpkin, an organic avocado, an organic and gianormous capsicum, organic ginger rocky road and a pear, prune and walnut chutney. Yeah, we got a bit carried away!


After lunch we took the bikes over to the reserve (walking them up the hill from the bay was one heck of a challenge...there was no way I was going to try biking up that hill!) and I finally got to test out riding clipless with my new mountain bike shoes (the weirdest name I've ever heard...despite knowing why they are called clipless pedals it doesn't make sense as you have to clip your shoes into the pedals so, therefore, they should be clip pedals). There was a lot of yelling of frustration and several bruises but in the end I finally managed to work it all out. J clearly has A LOT of patience! 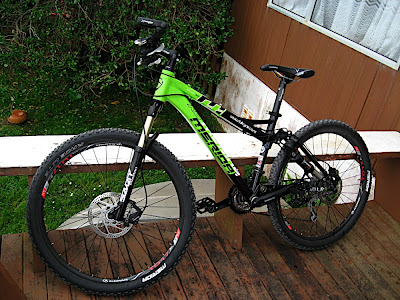 Above is my bike on the deck of our beach house afterwards...we had to put the normal pedals back on as I wasn't game enough to try riding along the gravel road in them in case I, well, fell off and forgot to unclip!

It was a pretty exhausting day and by the time we got back from the ride we were in desperate need of a shower and a hot dinner. Unfortunately not all plans end up how you want them to and we couldn't get the hot water cylinder for the bathroom going so had to wash ourselves down with a bucket of hot water from the kitchen!

At least we still had power though so a hot dinner was definitely on the cards. Roasted kumara chips, delicious curried vegetable pies and fresh salad with a squirt of lemon juice (lemons straight off the tree from outside) and chutney from the market...perfect! 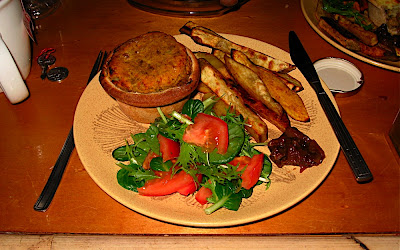 The following morning J took his bike over to the reserve to explore some more while I ran the tracks. Tawharanui has a maze of tracks through the farmland and native bush and having spent hours of my childhood exploring the place I know it like the back of my hand.


On returning it was, again, a wash using a bucket before sitting down for lunch. The previous night I'd roasted up the pumpkin while making the kumara chips so with the roasted pumpkin (it was beautifully sweet and rich) I whipped up a pumpkin and peanut butter soup. Although I was lacking in all the usual things I'd add to the soup to add flavour it still tasted delicious. Marmite mixed in hot water makes a great vegetable stock! 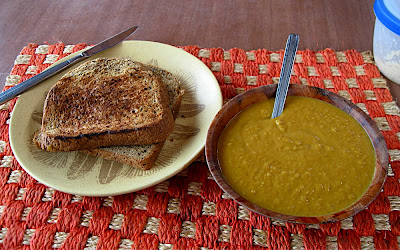 Here's the view from our deck at Wai Kauri Bay. It's like being in paradise. I spent a lot of my childhood up here in the holidays and weekends...swimming, kayaking, exploring the hills and forests, making sandcastles...ah, it's making me dream of summer now! 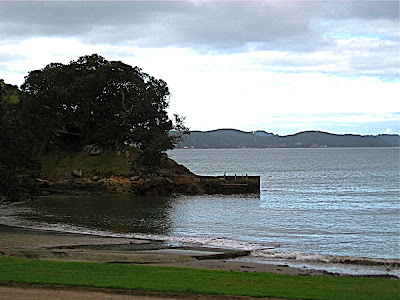