Take the Northern Gateway...it'll cost you $2

"It was simply marvellous. But, Laurie -" She stopped, she looked at her brother. "Isn't life," she stammered, "isn't life -" But what life was she couldn't explain. No matter. He quite understood.
"Isn't it, darling?" said Laurie.
- The Garden Party by Katherine Mansfield

On Sunday we had the unique opportunity to bike the nearly-completed Northern Gateway, a new toll road North of Auckland bypassing the old route through Orewa and Waiwera. The motorway isn't scheduled to open until February next year but they opened the road for bikes (in the morning) and walkers (in the afternoon so they didn't get mowed down by us bikers!) for the day so we could get a closer look. 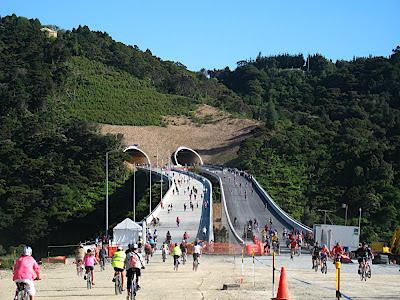 The new stretch of motorway is a pretty impressive feat of engineering combining design, engineering and attention to the environment (believe it or not!). The site of the motorway is home to native wildlife and special care were in place to minimise the impact on both flora and fauna along the route. The route crosses several main waterways and there are two eco-viaducts over some of the more sensitive areas. 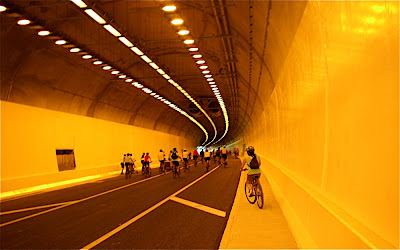 Inside the Johnstone's Hill Tunnel

It was cool looking down the sides of the bridges to see lush plantlife rising up below and extensive revegetation is planned for other areas of the route. 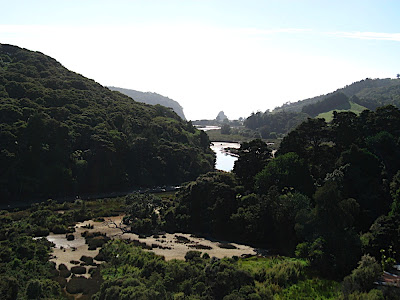 Looking down the river towards Waiwera

My parents were walking the 14km round trip later in the day when it was so scorching hot that they got tar stuck to their shoes. They also got held up in huge traffic jams trying to get to and from the start of the motorway. The irony is of course that this motorway, designed to minimise traffic holdups, was causing them as curiosity got the better of everyone! 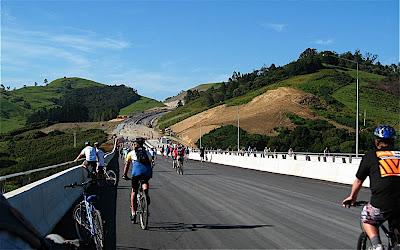 Cruising down the motorway.