One of the things I love most about rogaines is the scenery. You get to go to places you would never normally be able to see (as the land is privately owned or you are well off the beaten track - busy thrashing through matagouri or climbing up through the tussock).

But there is always at least one moment where you wonder what on earth you are doing out there and you wish it could just end. Last weekend that moment came as we were clambering up the steep, rocky slopes of Mt Trotter. The tussock was so high I couldn’t see my team mate and was hiding the dreaded spaniard, so I’d grab hold of some tussock to haul myself up with and find I’d managed to stab myself with the sharp points of the spaniard. It was worth it for the magnificent views and the 100 points we gained at the top though.

With no Heights of Winter last month I was definitely starting to feel anxious about not getting in a decent length race with my World Rogaine Champs teammate, L. We've done several short rogaines together (including a fun 3 hour one at Vic Park a couple of weekends back) and been in the same team for TWALK this year but a long rogaine is different. L is very fast and, as one of my friends says, an energizer bunny as well as being an excellent navigator. I was definitely getting anxious I wasn’t good enough to be her team mate.

Anyway, this past weekend we finally had a chance to race together at the Golden Road rogaine in Otago (in what was going to be a 13hr race but was cut down to 11 hours for various reasons).

A few of us drove down the night before and camped at the event centre (after a freezing weekend camping at Lindis Valley for a previous rogaine in April we all brought way too much gear for what turned out to be a fairly mild couple of nights!) so I picked up the map early and started planning our route...which turned out to be easier than normal - really just a matter of creating loops and working out which one to head out on first. So by the time L arrived I had a route all planned out (and fortunately she agreed with it!). 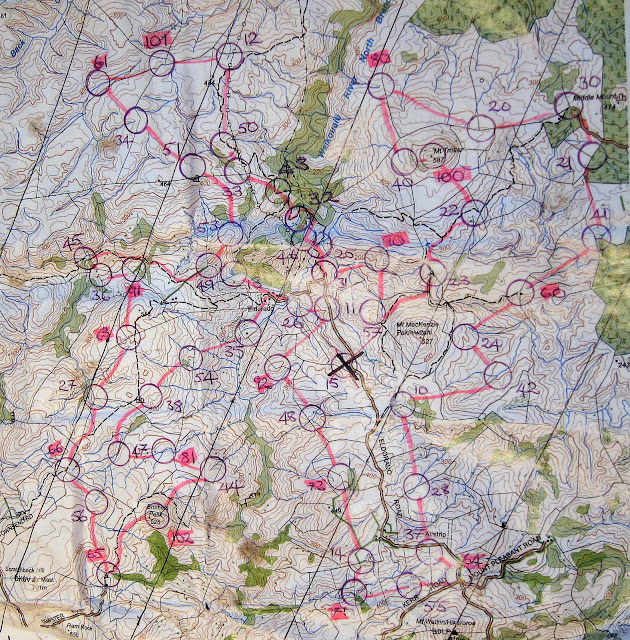 It was a pretty cold morning and we had a river crossing within a couple of minutes of starting (and then another one not long after that) so I think we were both glad to get to the first hill to start the warming up process. People were heading off all over the place and it only looked like a couple of other teams were heading out our way but they were a long way behind. This was pretty much the theme of the day as we hardly saw anyone out there and when we did they were going the opposite direction. It was like having the hills all to ourselves. Rogaines are funny like that. There could be hundreds of you out there but quite often you spend long periods of time seeing no one. Also, as usual, the scenery was spectacular. We didn't have a camera on us but there are some photos (and race reports) on Tane's blog and Matt Bixley's blog (complete with a photo of the awesome stone yards L and I got excited over).

We kept a pretty steady, quite fast (for me anyway, especially as I'd had a cold all week and was lacking that last bit of energy) pace, working as a team on our navigation. There was possibly a bit of a lack of focus (too much gossiping!) in the first hour but we got into a good flow. At just under 6 hours in we'd completed our first 2 loops so which meant we had time to head out the back to the far east of the map.

From #60 we ended up going to #42 first then #24 (the climb back up to this was tough going by this stage though) and in retrospect we should have left one of them out but we still thought we had time to finish with the #72 > #48 > #92 but by the time we actually got out to the road it was dark and we had 1 ¼ hours to go so it seemed too risky (if it had been daylight I think we'd have gone for it though) so we decided to abandon #72 and head straight to #48. We managed to screw up #48 and got ourselves into a panic (the first control in the dark is always entertaining!). Then it was an exhausting slog to the 90 pointer and down to #26 where we looked at our watches and saw we had about 15 minutes to go. We both joked that we'd get in trouble if we got back that early so we decided to risk another 10 points with #11. There was precious little time to get back to the finish after that so it was a mad dash down the hill to the woolshed where we got thwarted by all the stockyard gates! We must have clambered over at least 10 in our hurry! Made it with probably no seconds to spare!

All in all it was a great day and I am definitely feeling more confident about surviving the Worlds with L. We seemed to work well as a team and, most of the time, I didn't even feel too slow! Starting to get a little bit excited...2 ½ weeks until we leave!