The Arc of the South

A silence followed, as if the sound of the sea had faded. It seemed to Arren that the sun failed and dimmed, though it stood high in a clear sky. A darkness came over the beach, as though one looked through smoked glass; directly before Ged it grew very dark, and it was hard to see what was there. It was as if nothing was there, nothing the light could fall on, a formlessness.
- The Farthest Shore by Ursula Le Guin

I lived in Dunedin for a time, one of New Zealand's more Southern cities and pretty bleak and freezing in the winter (the perfect weather for staying indoors and reading under a blanket...or pulling on your polypro and going running in the ice if you're slightly crazy as I was...and still am). Luckily I was only there a year and a half or so otherwise it might have all got too much. Anyway, there used to be this cafe buried away on the more shady side of town called Arc Cafe. They used to have eclectic live music many an evening and the best vegetarian and vegan food I've found in New Zealand...seriously. I found out a few months after I left that it had shut down much to my disappointment.

My favourite treat from there was one of their vegan vegetable muffins...huge and filled to the brim with all sorts; mushrooms, sundried tomatoes, spinach, corn... Anyway, I've been on a little bit of a mission since then to create something vaguely similar. So far this is how far I've got (yes, the photo is corny (nooooooooo!) as...I was feeling a tad on the ridiculous side): 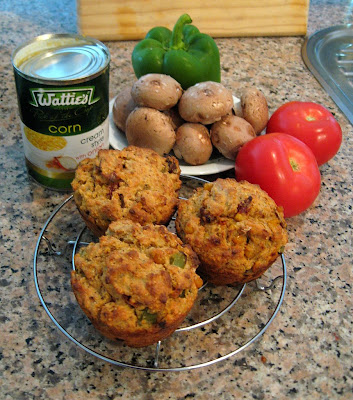 Cook the mushrooms and capsicum in a lightly oiled fry-pan until tender then set aside.

Cook the apples in the microwave until tender then blend until smooth. Mix in a large bowl with the soy milk, oil, creamed corn, sundried tomatoes, mushrooms, capsicum, paprika, parsley and polenta.

Mix the flours and baking powder together then add to the rest of the ingredients, gently mixing until just combined.

Spoon the mixture into 5-6 texas muffin tins and bake at 210ºC for about 20 minutes or until a skewer comes out clean.

Best served warm (spread with hummus, pesto or vegan margarine). These freeze real well too if you wrap them individually and put them in the freezer on the day they're made.