The delight of food in cardboard cartons

You see, it's so frightfully difficult when you've nobody. You're so at the mercy of things. You can't just be rude. And you've always this horror of seeming inexperienced and stuffy like the other ninnies at the Bay. And - and it's fascinating to know you've power over people. yes, that is fascinating...
- The Garden Party by Katherine Mansfield
I normally bring lunch to work (usually leftovers...my favourite) but sometimes I've forgotten or there isn't anything to take so then I have to head further afield to find food. There aren't a great deal of good lunch options near my work unless I feel like trekking down to the foodcourt (which normally, embarrassingly enough, I normally feel too lazy).

Probably my favourite place to go is Renkon. I pretty much always order the same thing... 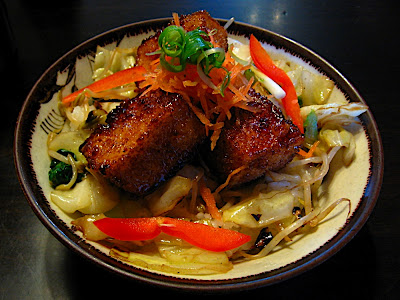 Teriyaki Tofu on rice (you can't see the rice 'cause it's hidden under so much goodness). So good.

If you get it takeaway you get it in one of those really cool cardboard cartons. 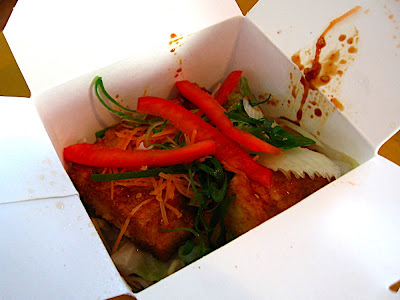 It's the little things that make your day!