Night was falling by the time Bastian came to the Water of Life and told his father how he had wanted to bring him some but had spilled it.
It was almost dark in the kitchen. His father sat motionless. Bastian stood up and switched on the light. And then he saw something he had never seen before.
He saw tears in his father's eyes.
And he knew that he had brought the Water of Life after all.
- The Neverending Story by Michael Ende

J was going to be a bit late home so I thought I'd clean out the fridge a bit and see what I could concoct. We had tempeh that needed using so I cut that in strips and marinated it with, well, whatever I could find...which wasn't a heck of a lot! There was also some courgettes and mushrooms so they got chopped and then chucked in the frypan along with the tempeh. To go with it I also attacked the useless blender and made spinach and almond pesto to go with the pasta (why is it that they recommend eating wholegrain pasta but then it's so difficult to buy?). 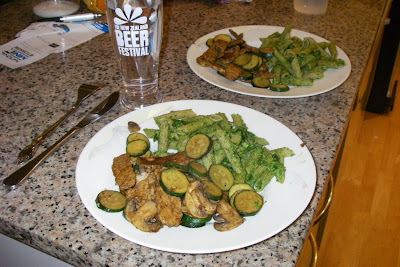 Naturally ('cause I'd be pissed if he wasn't), J was delighted to come home to the delicious smell of dinner about to be served (ow, aren't I sweet?!). And because I was feeling all rather domestic I made one of my usual apple crumbles to top it off. Ah yes, the best meal of the day...dessert! 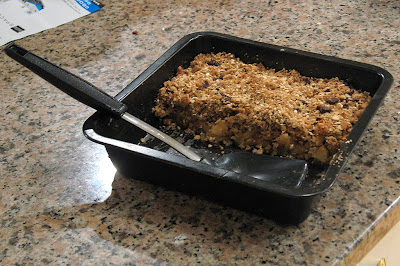