The DUAL Half Marathon

You have 4 options with The DUAL - you can do the 50km or 30km mountain bike races, the marathon or the half marathon and, obviously, I chose to do the half marathon. Again. You see, I did this race last year as well (although it had a slightly different start last time).

Just for an overview, here's the course profile with a total of 553 metres climb. Yep, pretty much as soon as you start you're heading straight up. There's no easing you into it!

Below is the course map for the race (click on the map to see it larger). Most of the sections on Rangitoto were on those narrow rocky tracks (scoria) so it's pretty lethal and you have to keep your wits about you at all times. The worst section starts around about the 12km mark and goes until you reach the causeway between the two islands. It's brutal. 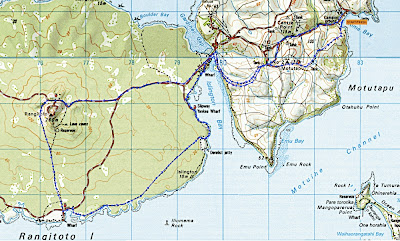 I was still feeling a bit sick and really wasn't feeling like doing this race to be honest. Last year I'd had a terrible race and I really wanted to redo it to what I knew I was capable of. So I set a goal of a time to beat and entered again. But then I got asked to be in a team for the ARC race the weekend before and all training got focused into that so the last time I'd done a long run was nearly 6 weeks beforehand so I'd given up on my goal and decided just finishing it would be nice (get it over and done with!).

Sitting on the ferry to get to the event I was feeling pretty relaxed and prepared to chill out and walk and enjoy the scenery if I began to feel too sick (I was still feeling pretty gluggy in the throat when I ran). By this stage I couldn't care less! But from what I learnt last year, don't place yourself too far back in the field especially when the course starts with a hill 'cause passing people is frustrating. So I stood about 2 or 3 rows from the back (next to the eventual female winner as it turns out) which felt about right. No one set off that fast to be honest and I had to pass a few people as we reached the hill but I was taking it pretty easy and picked a girl just ahead of me to keep pace with. She was going a little slower than my natural speed but I wasn't in any hurry. I dropped her on the way down Motutapu anyway.

I picked up another guy at the base of Rangitoto amongst a pack of about 15 of us and kept with him until he slowed down about halfway up so I dropped him. People were starting to walk around me and I ended up in the front of this pack (it's funny watching people come tearing past you and then they slow right down not long after and you just plod on past). I remembered it was quite important to get in front of people before the rocky downhill section began so I didn't get trapped (as offroad is my strength). It was also going to be important to remember the worst section was still to come and to take it easy. I passed a few people on the way down hill and a couple of fast guys passed me (which was the last time anyone passed me apart from 2 guys sprinting on the way down to the finish which I passed on the way up the hill anyway).

Once nearly reaching the bottom I cracked open my chocolate powerbar gel and made myself have half of it (all whilst still running - I tucked the other half in my back pocket and washed it down with heaps of my electrolyte drink in my camelbak. This was all in preparation of the killer section. It wasn't long before I could feel it kicking in...they are awesome (as far as gels go).

The next section (it's around about 6km along the edge of Rangitoto on rough volcanic rock. No hills, just undulation and a hell of a lot of rock hopping) was where everything went wrong last year. I just died totally which was so frustrating because rock should have been my strength over the other runners. This year though I was wearing my awesome Inov-8 Flyroc 310s (mine are the old school version though with the hideous fluoro green inside) and I knew this section was the toughest so I was prepared. So prepared in fact that I passed over 20 people in this section (including the last female I ever saw out there at around the 14km mark). I just kept myself running, knowing that if I stopped there was not much chance of getting started again. If I tripped then I slowed down a little and drunk some more. The shoes were great and I never felt in danger of my ankles going under plus they grip to the rocks with ease which gives you a lot of confidence in your footing!

Once I'd got off the rock I forced down the last half of the powerbar gel in preparation for the final killer hill. Going back up Motutapu is definitely the hardest of the climbs. Rangitoto might be nearly twice as high but this hill keeps lulling you into thinking you've reached the top...but then there'll be another small uphill, and another, and another...until you wonder if you'll ever get there. By now there were definitely people walking and I could see them ahead of me. I was determined to keep running, no matter how slow. This ended up letting me pass at least another 5 or 6 guys which was cool. 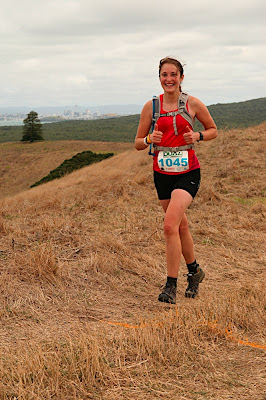 Looking pretty cheerful and fresh for the 19km mark!

Once you do actually reach the top of the final incline though, the view is amazing and in that moment I wished I'd had my camera. I also felt a little teary 'cause I'd actually found myself totally enjoying the race (that smile in the photo above is all genuine believe it or not). 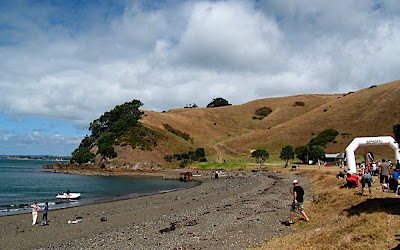 The hill down to the finish at Home Bay.

Then you're on your way down and feeling the pain in your feet (boy does the rock section hurt your feet) and it's all about staying upright. That hill goes on and on and you hit the final flat sprint section (maybe 200 metres?) at quite a speed. I was impressed with my sprint finish (and so was the guy just behind me who congratulated me once we'd both crossed the line)! 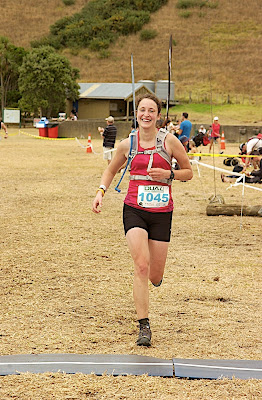 Look at the determination as I cross the line!

I finished in a time of 2 hours 22 minutes and 43 seconds which was just over 20 minutes faster than last year! I'm kind of interested in what kind of time I could have achieved had I not still felt sick, had a good night's sleep instead of staying up way too late and getting about 4 hours and, well, actually tried to get a good time. That's not to say I wasn't knackered at the end of the race but I definitely wasn't pushing it at any stage so I was thrilled with my time.

I don't think I want to do this race again in a hurry as twice is really enough (I can always head over to the island to run it again by myself anyway) but it's made me think a lot more about some of the other offroad races I've been wanting to do and how I am more than capable of doing quite well. I think so much of it comes down to the attitude I set out with. I definitely perform better when I'm more relaxed about it. 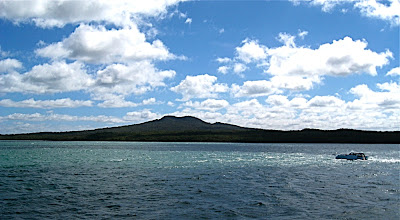