The Ophir Awesome E.P.I.C. Rogaine was a 12 hour race held out on the Raggedy Range above the small township of Ophir. It's typical Central Otago country with rolling farmland and lots of rocks. Thankfully it was a fairly fine day (slightly overcast and a fairly mild temperature for this time of year) as the area is pretty exposed and could have been pretty miserable in bad weather. 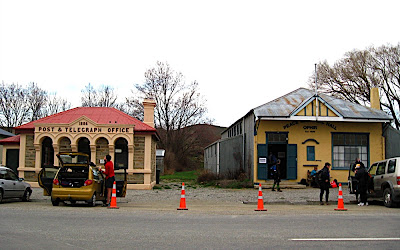 The event centre - the Ophir Town Hall on the right...I love the quaint old buildings down here

As I think I've explained before, with a rogaine you are given a map with all the controls and a certain amount of time (this one was 12 hours) and the aim is to get as many as you can. Controls are worth varying amounts of points (in this, #1-5 were 100 points, the #20s were 20, the #30s were 30 and so on). There are also penalties for every minute or part minute you are late back (it was 10 points for this race). So even if you are 1 second late then you lose points. You have a certain amount of time before the race starts to plan out your possible route although this will change as you go along depending on time. But with a long race you are normally required to hand in what is called a 'flight plan' in case of an emergency and a search party is needed so they have some idea of where you might have gone.

You will also have a list of compulsory gear that you must carry with you. For this race each person needed a fleece or woollen top, long sleeve polypro top, leggings, hat, and gloves, a wind and waterproof jacket and overtrousers, a survival blanket, a whistle and a torch (we carried head torches). As a team we needed a first aid kit and a compass. Then on top of that you will need food and drink for the full 12 hours. There was 1 water stop where we were allowed to fill up a maximum of 1.5 litres per person.

Rogaines are generally done in teams, mostly in teams of 2. I was in a team with Michael who has a mountain of experience in rogaines, especially longer ones such as this. Up until this event, the longest rogaine I'd done was 4 hours which rather pales in comparison with 12! 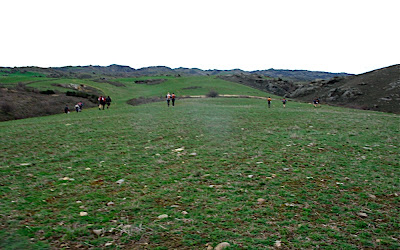 We all set out in the usual mad dash with teams mainly heading to either #20 or #50 first. We had planned on going to #50 and watched a few teams going off all over the place. We soon realised they were all going to look at the wrong sets of rocks so snuck off to where we thought it should be and had a good look around. Michael finally found it sneakily and we raced off while everyone else kept looking. Good start! But then we were on our own. No one else seemed to have a route anything like ours which was kind of cool but a little unsettling. 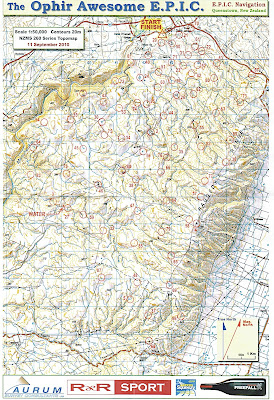 Michael's idea was that we would try and get as many controls on the flattish section first before heading out to the far end of the map so we didn't have to go looking for them in the dark which seemed like a good idea since we could clock up heaps of points quite quickly. Also quite a risky idea because once at the furthest end of the map we would have no real shortcuts back if time wasn't on our side. As far as I could tell, most teams seemed to have the opposite approach, choosing to get controls along the top of the range first then come down and do the flattish controls last. 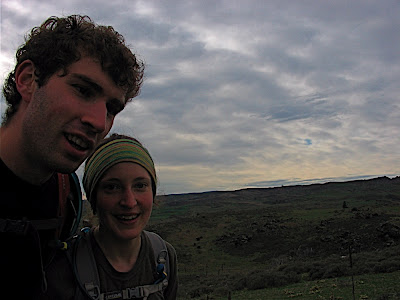 We were going pretty well and finding controls pretty quickly and it was cool seeing our control card filling up and I was feeling great physically although trying to keep up with Michael's ginormous stride was tough work! 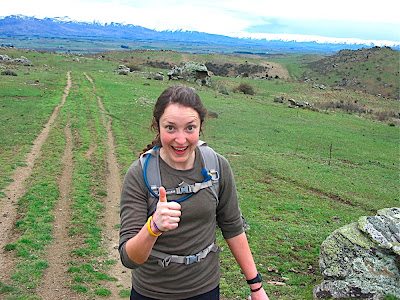 Fairly early on Michael decided we should add an extra loop (we called it the 'extended edition') which turned out to be a good idea but left me feeling a bit anxious about how far we still had to go. At the 4 hour mark we were still only about 2.5km away from the hash house! But our control card was filling up nicely which was encouraging! 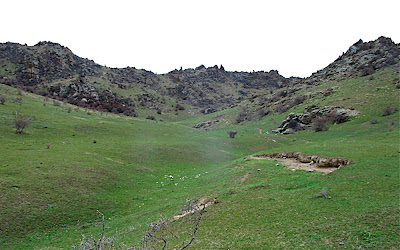 Although this event was using cryptic clues, it was nothing like TWALK where you practically had to do a grid search at every control to find the damn things. These were always in the centre of the circle and the clue pretty much always made sense once you got in the right area. It surprised me to hear other people talk of having a lot of trouble. I guess you needed to be able to navigate and read a map...which I would have thought went without saying? 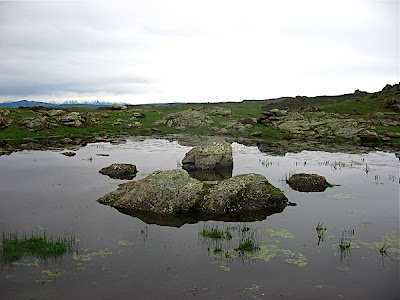 There was a control on the rock in the centre of the pool and being the kind soul that I am I let Michael go and get that one for us!

At about the 5 hour mark I began to feel really ill in the stomach and I had a headache. I knew I'd been eating and hydrating really well most of the time but I suspect I hadn't started early enough. The next 45 minutes were pretty tough until I could finally get my body to release some gas. I upped the electrolyte content of my water and made sure I was drinking a little bit more often and eventually it went away and I felt back to normal. It was a little freaky though because one moment I was saying I was feeling great and then bam, the next minute I'm incredibly nauseous. Definitely something to watch out for. 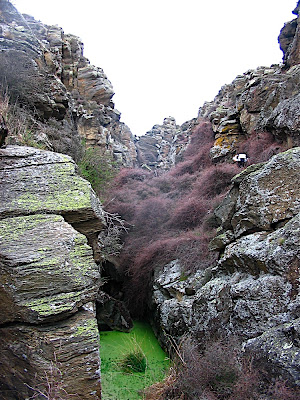 The gorge to #74. Thank goodness we weren't one of the teams trying to find this in the dark

We reached the water stop at just over halfway and met Greig and Conal there who had gone the other way. It was a bit of a boost of confidence really as they reckoned we'd have enough time to get out to the end and over the tops. Good news for me as I'd been beginning to feel a little panicked! We fueled up and set off again, bumping into Tim and Tane coming the other way as well. They looked knackered. 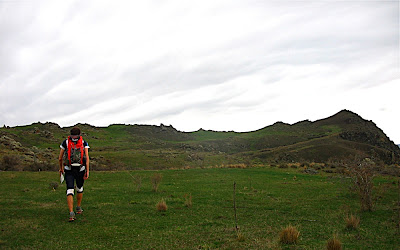 Tiger Hill on the right and control #1, worth 100 points

After that we pretty much saw no one apart from 1 other team briefly. My feet began to hurt and I learnt an interesting tip...if you dry your feet and change your socks you'll get at least another hour out of them before you get back to the same pain point you were at before. 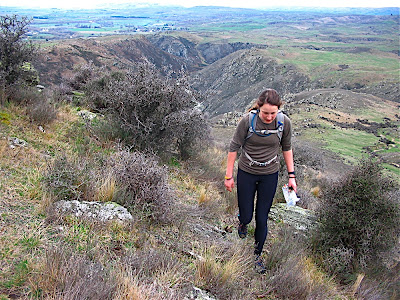 We made it up to the trig at the highest point on the course just before 6pm so it was still daylight but we knew there was only limited time left before it would start to get dark. At this point we still weren't sure just how much of our homeward plan we would be able to complete but were feeling fairly optimistic. 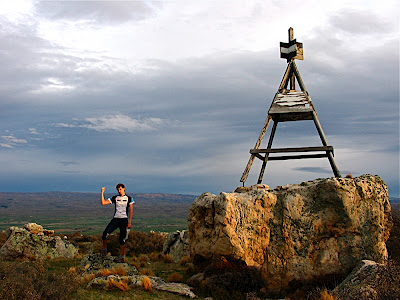 The highest point on the Raggedy Range

Navigation was going pretty well until #36 where I pointed to a hill in the distance and said something like, "we're going to that hill, right?" and Michael agreed so off we ran...bad mistake! We ended up well off and desperately searching the rocks for the damn control which, of course, never appeared. Eventually Michael realised what we'd done so we trouped off to the correct hill but even then we couldn't find it. But just when we were about to give up we saw it at last! I was feeling a bit disheartened by then because we'd wasted a fair amount of time and darkness had pretty much arrived so it was time for the headlights. The time lost meant we had to reevaluate our plan of attack and cut out a short loop we had planned, instead heading straight across to #89. 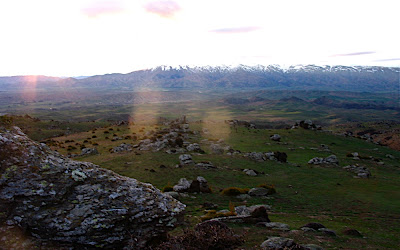 Not long after it got dark my feet started aching unbearably and my knee injury from a few weeks back decided to flare up so it was an incredibly painful last couple of hours but I was pretty determined that it wasn't going to slow us down too much. But I kind of gave up helping navigate by this point and just focused on keeping on moving.

Somehow we managed to stuff up our route from #73 down to #80 and missed the control altogether. If I'd known how close we were to it I would have made us go back but Michael didn't tell me that until afterwards. Not really sure what went wrong as it looked fairly easy on the map but then again it was downhill and I was having too much trouble with my feet to check the map much! 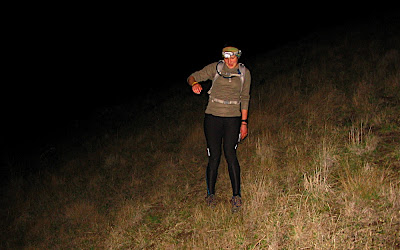 My awkward shuffle-jog once my feet gave up on me!

From #70 we bailed out to the road instead of going to try and find #21. It just wasn't worth the pain. And somehow I got myself running at a cracking pace for the last 1.5km or so which surprised me! I guess Michael encouraging me that we could overtake the team in front kind of spurred me on as well as the fact that running was a lot less painful than walking (your feet aren't on the ground as long and there's less pressure on the hips!). We came back with 5 minutes to spare and I was so thankful to sit down and attempt to stretch out my legs (oh, and eat peanut butter sandwiches which taste mighty fine after a diet of 4 OSM bars, 2 small clif bars, a small handful of dried fruit, 6 squares of chocolate, 4 powerbar gels and lots and lots of replace...gotta love racing food!).

I was surprised at how much energy I had during this race despite how sore my feet were...although the thought of another 12 hours on top of this was pretty scary! Oh well, still another couple of months till the Worlds! I thought we did pretty well and made an excellent team although the last couple of hours were not as successful as they could have been! As it turns out, we won the mixed grade (and 5th overall...even, somehow, beating Georgia and Fleur)! Yay! I hope Michael keeps my bottle of wine safe 'cause I deserve every bit of it!