The satay of greatness

"A few weeks ago I'm sitting on a three-ply tea chest which some enemy had left at my place for kindling"
- Half Gallon Jar by Hori
So, umm, I did a race a little while ago, hence my travels down south (and before you know it I'll be heading south again...yay!). It was quite a long race (24 hours anyone?). So long in fact that I even took some satay tofu (and rice) with me! 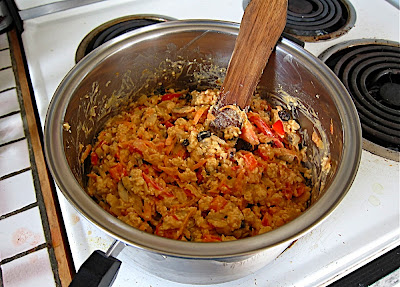 No, not that much! But I did cook a rather epic amount so was eating it for days...literally (well, 3 days). We even made some of it up into a pasta dish for the night before with some added veggies... 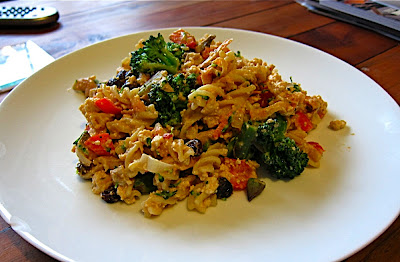 I would give you a recipe but really it just consists of cooking up some veggies and then throwing in a disturbing amount of peanut butter (okay, slightly simplified but I'm sure you can imagine it...right?). I did actually once try to write it out for my lovely cousin D but I got a bit thrown when it came to amounts of stuff. So basically, I'll just tell you what I normally put in it and you can do the rest...

This particular one was a lot plainer than normal since I was going to be eating it on the go but normally I'd cook up a whole heap of veggies like onion, red capsicum, grated carrot, broccoli etc. Drizzle in a little soy sauce/tamari and sweet chilli sauce. Then start scooping in big spoonfuls of peanut butter (and I mean BIG). I normally add one spoonful at a time with a little bit of water. You can also add a big handful of raisins or sultanas (or even chopped dates) at this stage. Crumble in your tofu. Add some more peanut butter and water. I'll be totally honest here and say I can easily use over two thirds of a 300g jar of peanut butter for a whole block of tofu. That's why it tastes so good! Then chuck in a big handful of cashews and voila!

It's awesome on rice, pasta, toast, quinoa...anything really. I've eaten it for breakfast, lunch, dinner, middle of the night, snacks...oh, and it's also great unheated later on. I've even made it with cashew butter instead!