'While I was asleep I dreamed I was a snowflake again, a tiny flat Peter-Paul tissue of snow with zigzags of air, like melting lace, binding the edges of my body, and I was tucked up in the sky under a soft blanket of cloud and there was no thought of conquering the earth of the sea and no idea that I would ever be a snowman witnessing the comings and goings of people upon their curiously snow-white earth.'
- You Are Now Entering the Human Heart by Janet Frame
My flatmates are really good friends with The Chef so last night we decided to have a little dinner party for a few of their friends at my flat. The decision was to have a 3 course meal with a palate cleanser in between each course. The catch? It was going to be 3 courses of dessert!! Everyone joked that it ended up being more like 5 courses (6 if you count the crackers, hummus and sundried tomatoes that someone else brought round). Epic! 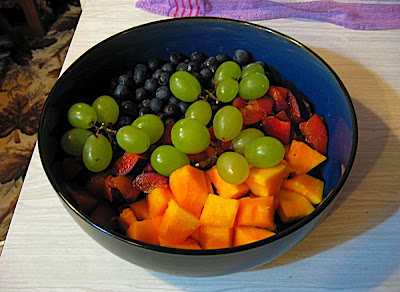 The first course was waffles with fruit which I was placed in charge of. You see, when I was in high school I was a bit of a waffle queen. Our group of friends used to have sleepovers all the time and I would often make waffles in the morning for everyone. Anyway, I ended up making the Old-Fashioned Chelsea Waffles from Vegan Brunch but used agave instead of barley malt and added cinnamon. 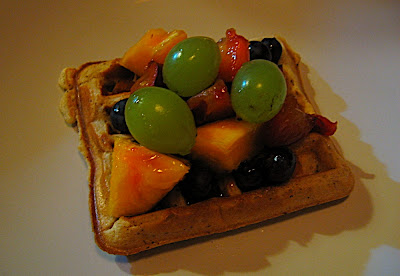 Pardon the lighting...whoever designed this place clearly favoured mood lighting over being able to see! Anyway, the waffles were a great success with everyone but I think I prefer a more flavourful waffle personally.

The second course was the chocolate course...very important in a dessert extravaganza! This one was a team effort. I made the Ultimate Brownies from The 100 Best Vegan Baking Recipes (yep, this is the 3rd time I've made these in a rather short space of time...they are THAT good!) which The Chef topped with a chocolate and hazelnut mixture based on the lemon cashew filling from Vegan Brunch and then a kind of chocolate sorbet that he didn't end up freezing 'cause he decided it tasted really good still runny. 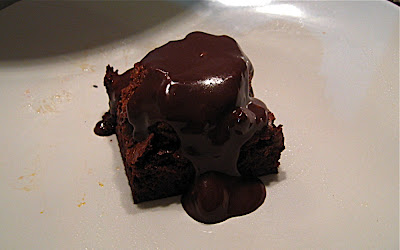 It was incredible...but SO rich! I struggled to eat it all but it was so good so every little mouthful was going in my stomach no matter what! The consensus around the table was that this was the favourite of all the courses. It's always hard to beat chocolate.

The final course was, thankfully, the fruit course otherwise I suspect no one would have been able to handle it! The Chef was in charge of this. He made poached peaches with hazelnut praline and it was incredibly delicious. Oh man, so good and a perfect way to finish off the meal. 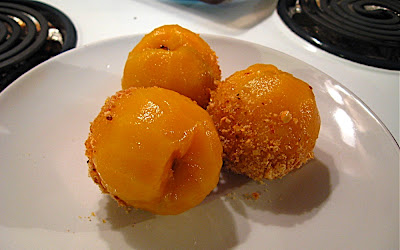 Oh yeah, and in between each course we had grapefruit sorbet to cleanse the palate! Classy! 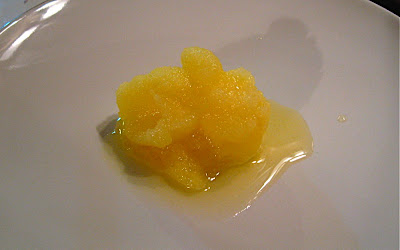 It got a bit runny after awhile but it was still so good. The grapefruits are off our tree but we never really eat them so we dumped The Chef with a huge bag a few weeks ago and this is what he did with them. Quite possibly the best sorbet I've ever had (and I've tried quite a few).

I was feeling a tad ill and in a bit of a sugar coma this morning after last night so breakfast was a tofu scramble with lots of veggies and toast. 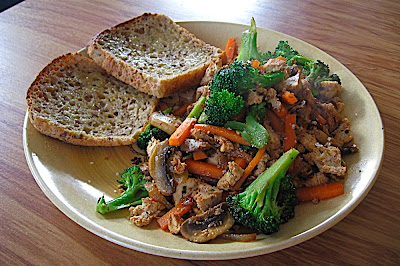