I'd heard of this race many times but never entered before. The original race takes place in Rotorua but it's become so popular that they now have events in Auckland and Palmerston North as well. A few of my friends from mountain biking convinced me to give the Auckland event a go and I'm always up for the challenge. This year's event took place at the Woodhill Sands Equestrian Centre about 45 minutes north (west) of Auckland.

The full race is 12kms (2 laps of a 6km course...there is a 6km option) and is, according to the website, based on an "army type obstacle course". You can run, walk, push, crawl or climb through a variety of natural and man made obstacles. Apparently the maximum depth of water at any stage is approximately waist deep...as you will read later on, this was not quite true by the time it came to my second lap! Basically it involves a whole lot of mud, barbed wire, bush and paddock sections, hurdles (it's run out of an equestrian centre) and swamp crossings. 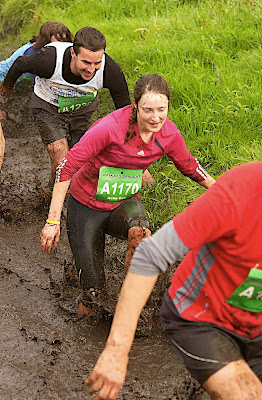 I started about three-quarters of the way back with my friends which turned out to not be the smartest idea as I spent all of the first lap trying to get past people. There were so many people anxious about jumping into the swamps and people walking up hills blocking the way which made me lose a bit of momentum. I got swamped by one guy when I was in one of the mud pools and he jumped in next to me. It felt like a tidal wave going over my head! 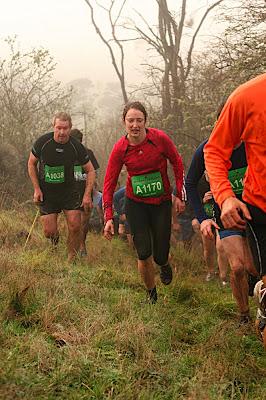 The second lap was better as it was really spread out by then and I passed a few more people. All was going well until we caught up with the 6km guys (they started 10 minutes after us) who were picking their way over everything. Luckily they were pretty good at getting out of the way and yelled encouragement...one of the bonuses of being female near the front of the pack as you get heaps of support. 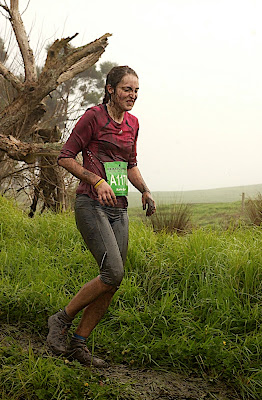 I was ahead of a couple of girls until right near the end when I got stuck behind a gridlock of 6km people and I took a stupid decision to jump into the stream (it was neck deep by this point). It was bloody hard to get myself out again! The other girls managed to get through the gridlock and went round and got ahead. I managed a good sprint finish to get within a few seconds of them but I would have been 3rd if I'd done what they did but had to settle for 5th. Damn! 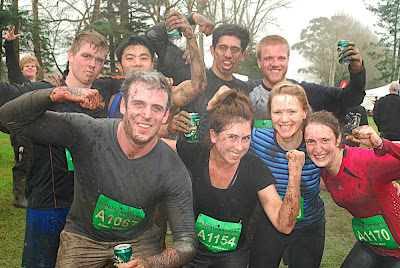 I finished in just over an hour and 9 minutes which isn't too bad a k rate for mud, swamps, obstacles and sections of crawling under barbed wire! My verdict? Heaps of fun but not really that tough to be honest. I'll have to try the event at it's home (Rotorua) next year.