Turning up the heat

The sun sank lower, an orange ball partially masked by the evening haze, moisture coming in from the water. Low clouds presented black faces, with silver, golden, pink, and orange highlights, and the sky was streaked with reds and golds.
- The King's Buccaneer by Raymond E. Feist
My freezer supplies were getting a bit low so a bit of baking was required. One of my favourite things about baking is the way the smells fill up the whole house...always makes me smile. Anyway, first up was a loaf of country-grain bread from a bread mix. I put it in the breadmaker to knead, took it out and let rise in the loaf tin (in the gorgeous spring sunshine) and then baked it in the oven. Once the loaf cooled I sliced it up and put it in the freezer for breakfasts and lunches later on.

I'd made the berry spelt muffins several times so I thought I'd mix things up a little and whipped up a batch of texas-sized Zucchini Spelt Muffins from Vegan Brunch (I love the taste and texture spelt flour gives to baking). I added chopped dates and walnuts for some extra oomph! 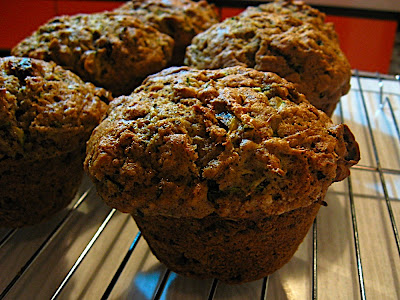 These are really delicious...really moist and lightly spiced. Perfect. It's actually the first time I've ever baked something with grated zucchini but it most certainly won't be the last.

My flatmate has been stuck in the house looking after the puppy day after day for the last couple of weeks and was feeling a little down so I whipped up a batch of Peanut-Ginger-Sesame cookies from Veganomicon for her (I made them gluten-free with the Healtheries Simple Baking Mix as she isn't supposed to have gluten and without crystalised ginger as she's not a fan so instead I upped the amount of ground ginger to a teaspoon). 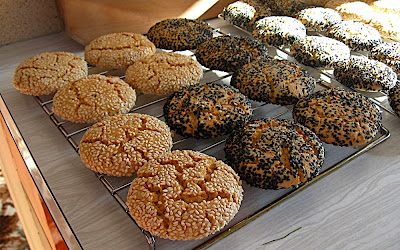 We had a few girl friends round that night and demolished quite a few (as well as a fair amount of dark chocolate naturally)...they are SO good!