TWALK is basically a 24-hour orienteering race split into 5 legs and is held at a mystery location in Canterbury every year by the Canterbury University Tramping Club. Oh, and you get to dress up in ridiculous costumes...at least at the start before they become too annoying and you have to ditch them. This year the race started at the Cave Stream carpark just down from Craigieburn with the Hash House (like base camp I guess) at the Flock Hill Lodge. Basically leg 1 is about getting from the start to the Hash House and all the other legs are based from there. Leg 1 is the only compulsory leg (obviously). Make sense? Good. 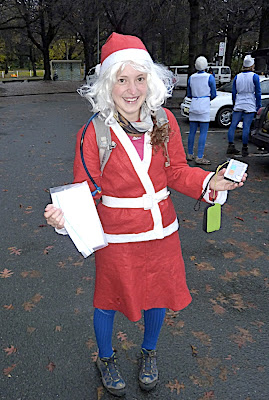 At the uni carpark wondering what on earth I'd got myself into but terribly excited all the same.

I was in a team with a couple of Christchurch-based orienteers, Michael and Tane. Tane and I were rocking the Mr and Ms Claus thing and Michael, well he decided to wear a netball skirt and suit jacket...how that fitted with our theme I have no idea but there you go...! 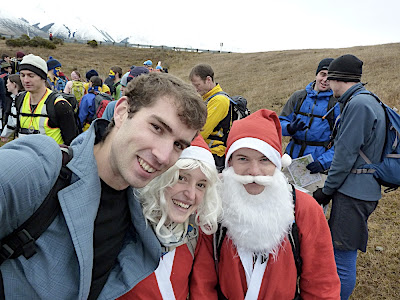 Michael, me and Tane at the start...exciting!

Michael was our trusty team leader having done this race something like 10 times before. Tane had done it about 4 times. I figured that if people had done it that many times and were still keen to come back and do it again the following year then it couldn't be too bad! 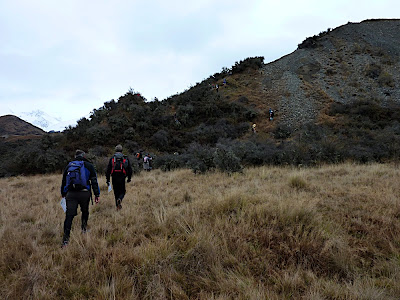 A control is somewhere up there amongst good old Matt and Garry (a TWALK term for the thorny matagari bush).

We set off at a fairly reasonable, cruisey pace with the idea that there were many hours ahead of us. It actually wasn't nearly as cold as I had thought and we were all stripping off layers (and bits of our costumes) fairly soon into it. The river crossings were another story though. At least my shoes were super fast draining so the cold water didn't stick around. Navigation wasn't very hard (although Michael will perhaps never live down leading us up the wrong spur to the wrong clearing especially since we all said we trusted he was correct). Once at the control circle though it's a different story. 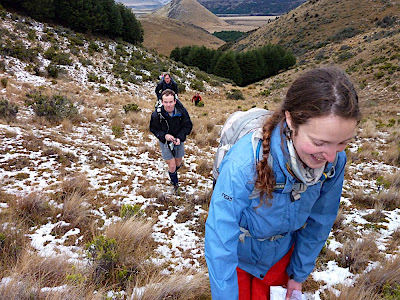 One of the big elements about TWALK is that the controls are hard to find and the clues are terribly cryptic. They may not even be quite in the control circle on the map let alone in the centre as they are for traditional orienteering. For example, there were clues like 'break me off a piece of that chocolate' which translated as a broken tree branch lying on the ground in a patch of beech trees where there were lots of broken tree branches all over the ground! I was quite proud of finding the control at the top of Helicopter Hill and then fooling other teams around us into looking further down. Brilliant! 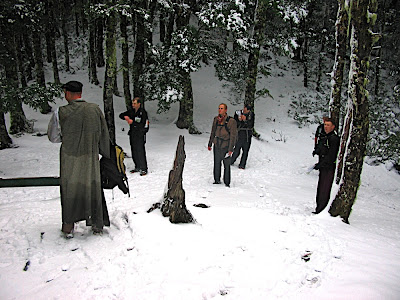 This photo reminds me of The Lion, The Witch and the Wardrobe for some reason...all that is required here is a lamppost.

Anyway, we finished Leg 1 in fairly reasonable time (roughly 5 and a half hours - I think we arrived at the Hash House in 4th place which was quite amusing considering we were just cruising compared to a couple of teams who raced past us near the end...clearly speed doesn't necessarily win you the race in TWALK). 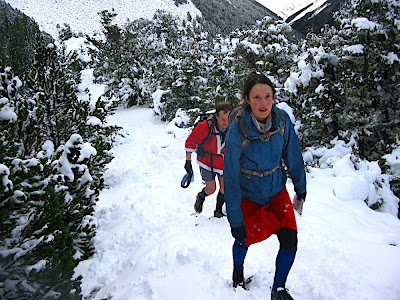 Leg 2 looked like it was going to be tough...just how tough we were about to find out. It was getting dark by the time we left the hash house (we had a fairly leisurely transition) so we had our headlights on in preparation right from the start. There was a hell of a lot of uphill along a road (looking for controls along the way) and it didn't take long before we were into the snow.

Somewhere along the river I managed to slip over and twist my left index finger back in such a way that it hurt like hell (we now suspect I actually cracked a bone). Luckily it was cold so my hands were feeling a bit numb! Then as we climbed our way out of the river a bit later I managed to stab my left eye (clearly the left side wasn't lucky) with a protruding branch and lost a contact. Guess it didn't matter too much that I was a bit blind after that since it was dark but it did affect my balance! 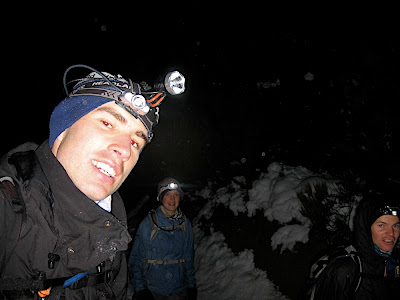 Yep, it got dark and cold

We could see various trails of lights along the hillside to our right so we figured that was where we were heading. With a bit of luck we managed to find all of the controls up there (turns out that a lot of teams didn't find them...clearly we had the skills or something!).

We had decided fairly early on that we wanted to tackle the controls on the top of Broken Hill which turned out to be a mistake but it certainly led to an adventure. Most teams were turning back by #11 with the idea of trying to get all of leg 3 instead (which looked easy but apparently the clues were ridiculously hard and most teams got very few points despite being out there several hours). Climbing up from #11 we encountered a thick bush of young pine trees we had to bash through for ages which weren't shown on the map before finally getting out into the open and by then we were soaked right through our waterproof gear. Not good. 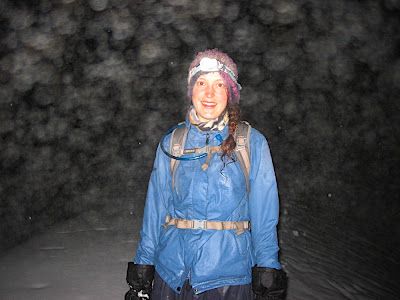 Once on the top of Broken Hill the snow was getting pretty deep in places (I managed to sink up to my waist once) and the weather felt like it was packing in...rain, sleet, snow and wind were making things very unpleasant. We managed to keep our spirits up for awhile but finding the controls on the ridgeline were proving to be pretty tough and it was too cold to search for long. Somewhere along the ridge I started to get extremely cold and was having trouble moving so the boys pulled out more warm gear from their packs and helped get me into it. They were worried I was getting close to hyperthermic.

But not long after, we all started to freeze. The control on the saddle was nowhere in sight, the weather sucked and our morale was going downhill. Michael made an executive decision that we needed to get off the ridge and down off the mountain as soon as possible. Tane led the way, working out the safest route down through the snow and rocks. I was having trouble even walking as I got colder and colder. Things were not good. And then we hit the scrub. I could see the valley below and it seemed miles away (Michael optimistically reckoned it wasn't too far but then he was saying that the whole time...anything to make sure I kept moving). Tane bashed ahead while Michael helped me down. I spent way too much time on my arse but I couldn't keep myself on my feet...not helped by snow and thick scrub. I've never been so happy to reach the bottom of a hill in my life!

We decided that we were just going to curl up in our sleeping bags once we were back at the Hash House and call it a day. Good move since it was already 4am by then. I would have liked to have been out for the full 24 hours but in reality it wasn't going to happen after Broken Hill. If we hadn't gone over the tops I'm pretty sure we would have been keen for more. It was a bad decision but at least we had quite an adventure and it certainly makes a good story! 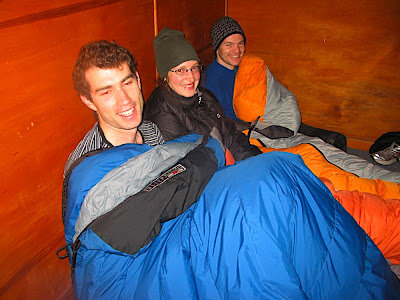 Oh dear! What a terrible after photo (and this was the best of the bunch). We are attempting to get warm again in the Hash House.

Once back at the Hash House I was so cold that I couldn't move my limbs enough to get into dry clothes so I had to be helped. Not good. I barely managed any sleep and nothing seemed to warm me up but at least I was beginning to feel a little more defrosted. It wasn't until the trip home on the bus that I finally managed to fall asleep... 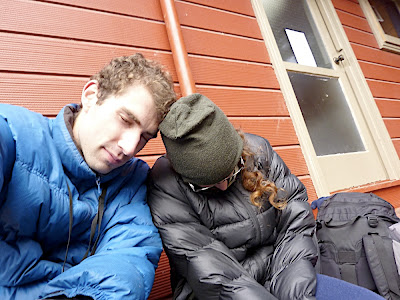 Drifting off while waiting for the bus to arrive to take us back home again.

I keep getting asked if I'd do this race again considering the conditions we ended up in. Maybe I'm completely mad but I can't wait until next year. Bring it on!