Wafting through the kitchen

Conversely, with the glassy face, it was all than an eye could do to keep from sliding off it.
- Gormenghast by Mervyn Peake
There's nothing like a spot of baking to make the house smell great and there have been some damn good smells coming out of my kitchen lately! First up were some chocolate brownies for a picnic in the bush using the Ultimate Brownie recipe from The 100 Best Vegan Baking Recipes. 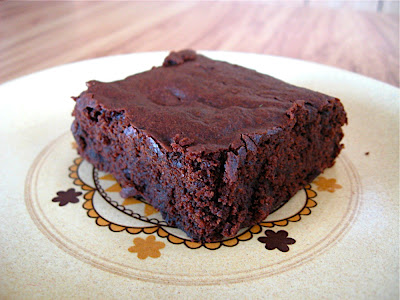 These were seriously good, deliciously chocolaty and clearly passed the test as The Chef thought they were yummy (he even asked for the recipe so they must have been good!). And seriously, when you've been tramping and exploring the outdoors, what could be better than delicious brownie?! I don't actually think I've ever made brownies before but I certainly will again now!

The following day my lovely cousin D came over to do some baking with me. But first up we hit the supermarket and the health food store to get supplies. By the time we got back to my place we were starving so I whipped us up some lunch. 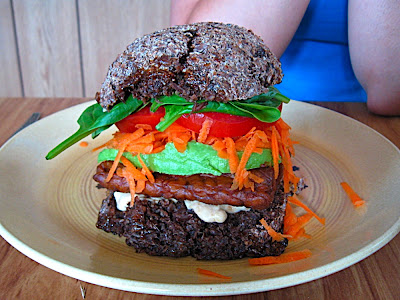 A tempeh burger pattie (basically just a square of marinated tempeh that I fried up) with avocado, tomato, grated carrot, baby spinach and hummus inside an essene bread bun. Very delicious and very filling.

We made a batch of muesli bars (recipe here) and then whipped up some energy blast cookies. We were dozing on the couch so they got a little overcooked but still smelt awesome. The recipe is a highly adapted version of the one found in one of the Sri Chinmoy cookbooks we have around the flat (I’ve had them before from The Lotus Heart restaurant in Christchurch). Below is my version... 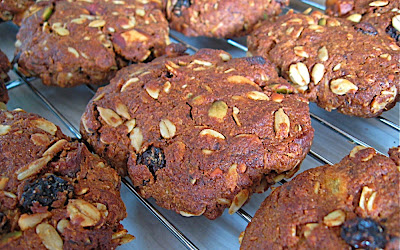 Makes roughly 20 cookies but it depends how big you make them (the larger they are, the more cooking time they'll need).

Preheat the oven to 180C. Mix together all the dry ingredients in a large bowl.

Put all the wet ingredients into a saucepan and heat until just boiling then remove (stir while it's heating so everything mixes in together and doesn't stick).

Mix the baking powder and boiling water together and stir to dissolve. Add this to the syrup mixture. Add the wet ingredients to the dry ingredients and mix well.

Roll into balls and press flat (but still quite thick) on an oven tray. They don't need to be too far apart as the mixture doesn't seem to spread that much on baking. Bake for about 15-20 minutes or until golden brown (probably more like 15 minutes since we managed to burn them a little on 20 minutes 'cause I wasn't paying attention).