Warm me up please

'So how come you left the Evil Dark Lord business, Harry?' said Cohen.

'Werl, you know how it is these days,' said Evil Harry Dread.
The Horde nodded. They knew how it was these days.
'People these days, when they're attacking your Dark Evil Tower, the first thing they do is block up your escape tunnel,' said Evil Harry.
'Bastards!' said Cohen. 'You've got to let the Dark Lord escape. Everyone knows that.'
- The Last Hero by Terry Pratchett

It is definitely got that winter feeling around here although our spin instructor this morning announced that there was only 2 more weeks of winter to go...hahaha. It doesn't snow in Auckland but if you had squinted your eyes a little a few weeks ago in the dark evening you would have been forgiven for mistaking the thick layer of hail for snow. According to records snow was officially recorded on the ground in Auckland in 1939. On Thursday, July 27 1939 snow lay on the hills (up to 2 inches on the top of the Waitakere Ranges and Eastern Bombay hills) around Auckland with dustings to sea level. This is the only record of snow lying on the ground in the Auckland City area since meteorological records began back in 1853. It would have been exciting to discover it really was snow this time but, well, no. It was freezing though especially coupled with the strong winds and heavy rain.

Then not long after that we got blasted by storm after storm. Nothing too bad in Auckland but if you lived in some suburbs on the North Shore you lost power and hot water. Other parts of the country were not so lucky with serve flooding and damage from the powerful winds. We just had rain...and more rain. Oh, and some icy gusts.


So when the winter has well and truly set in you need warming foods and what better way than a thick, chunky soup. 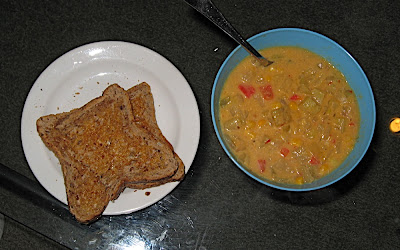 The other night I adapted good old Alison and Simon Holst's recipe for Corn Chowder using kumara instead of potato (it just sounded yummier), adding chopped up capsicum and spicing it up a bit with a rather large dash of J's mother's homemade chilli tomato sauce. (oh, and omitting the cream which I replaced with more soy milk). Just what we needed to warm up our insides.


Cooking up hearty dishes in the oven also helps keep not only us warm but also the whole house as the heat from the oven radiates through the living room (not to mention the delicious smell). 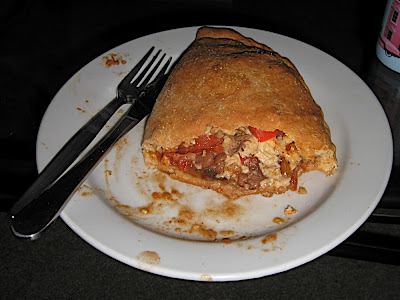 I hadn't made calzones or pizza dough in a while since I couldn't use my right arm to help kneed but it's improved a little (admitedly I mostly used my left arm anyway). So here we have a partly eaten ginormous calzone filled with vegetables, beans, more chilli tomato sauce and grated sheese (we've been trying the smoked chedder style and it's delicious).


Next up, pizza...there is nothing like homemade pizza dough. Mine is usually a half/half wholemeal/white with some coarse polenta thrown in for good measure! 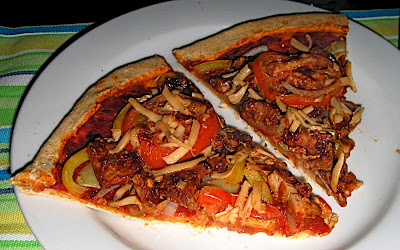 Over the top of a thick coating of tomato paste I scattered sliced veges and marinated some tofu with a sprinkling of yeast flakes and some more of the sheese grated and added in the last few minutes of cooking to stop it going crispy.

Here's another variation on wraps. Lately I've always got a store of these fancy wraps from the fruit and vege store in my freezer (these are apparently basil pesto wraps but the sun-dried tomato ones are also deliciously vegan as well). They defrost in a matter of minutes (well, enough to be flexible then you just chuck the whole wrap in the oven to warm it up). Very handy for those lazy, cold, wet (very wet lately) nights when nothing springs to mind. 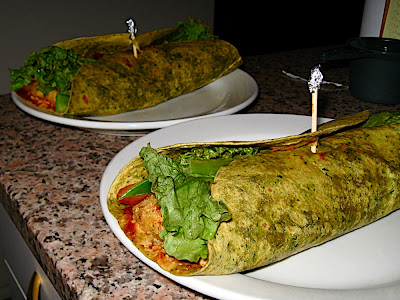 The wraps are filled with homemade falafel and veges with a good dosing of J's Mum's spicy tomato sauce and some homemade hummus.


And what better way to warm your tummy with a simple crumble and custard for dessert. Perfect! 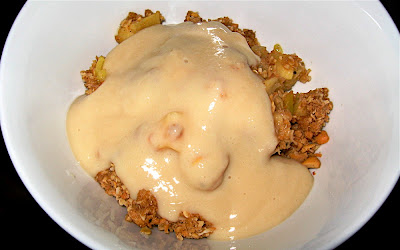