Wave your flags for the truck parade

Reading is an act of friendly isolation. When we are reading, we make ourselves unapproachable on a tactful way. Perhaps that is exactly what has interested painters for so long in the portrayal of readers: showing people in a state of deepest intimacy not intended for outsiders.
- Reading Women by Stefan Bollmann. Foreword by Karen Joy Fowler.

Yesterday I met my darling cousin in town for lunch for a bit of a family gossip session (there is enough drama in our family for a whole soap opera at the moment!). Anyway, we decided to check out Revive, a vegetarian cafe near the bottom of town. We both ordered the hotpot (African Black Bean Stew on brown rice) with a salad. I must have seriously been in a bean kind of mood since I picked the Chilli and Ginger White Bean Salad! 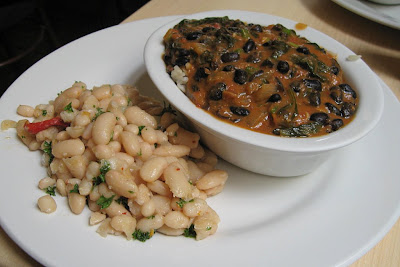 It was pretty good but I really wasn't that hungry and I was definitely beaned out by the end. I probably should have got something more like D's salad, Spicy Mexican Potatoes. 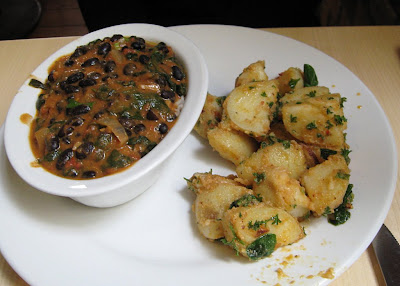 Anyway, while we were eating we were discussing the big truckie protest scheduled for the next day (today). D was wondering how she was going to get to work on time since she lives across the bridge and the trucks were supposed to be clogging up all the main roads into town all morning as the descended on Queen Street (Auckland City's main street). The truck drivers are protesting against a sudden increase in road user charges in diesel vehicles. This kind of protest has been done overseas and D was telling me about photos she'd seen from Europe so we were definitely keen to check out the action.

So this morning J and I walked down into town to see what was going on...well, we walked out our front door, up about 200m to the main intersection at the top of Queen Street and were greeted by quite a sight. There were trucks everywhere, horns blazing, and police attempting to direct traffic (to get all the cars out of the way of the protest route). For a little city it was crazy! 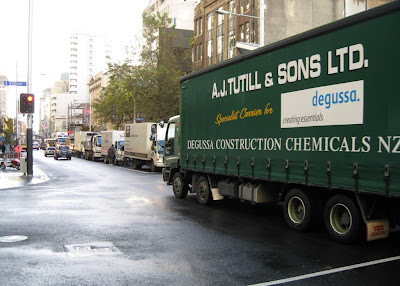 The further down Queen Street we got, the more crazy it got. There were lines of trucks snaking up and down the street...a street where you would normally never even see trucks. People were out everywhere watching. From the general feeling of the crowd you got the idea most were in support of the protest (or just excited about seeing so many trucks all together in one place). 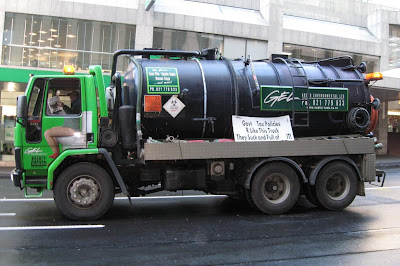 After dropping J off at work (well, walking to his building with him) I stayed around in town just watching and listening for a while longer whilst indulging in my latest addiction: a Pina Colada fruit chiller from Gloria Jeans (terrible I know!). 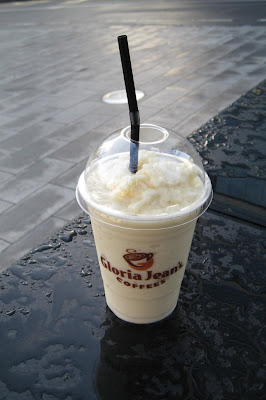 The sound of the truck horns echoed through town all morning, the different tones creating a strangely musical harmony. It was quite an experience! 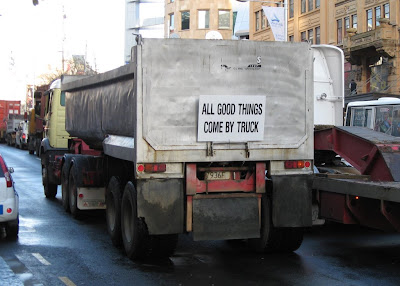