Here we were, bounding through the cemetery, going toward the Wicked Witch of the West, instead of hiding in a dark hole where she couldn't find us. This was so smart.
- Dead to the World by Charlaine Harris
(I think someone has a Sookie Stackhouse addiction...and I think that someone might be me)

My new flat is on the edge of an orienteering map...how cool is that?! Admittedly it's just a park map but still, it's pretty awesome. I mean, I've lived down the road from maps but never, well, actually on a map before. I've run past this house countless times. I know this area backwards. You just don't understand how cool this is!

A couple of weeks ago my beautiful cousin K and my awesome brother C came round for one final dinner at my old flat. I was trying to clean out my fridge and pantry so I cooked up all the potatoes I could find, a block of tofu and every vegetable I had left (apart from all the carrots because if I'd done that we would have turned orange). Oh, and finished off the last of a jar of peanut butter and one of macadamia nut butter. 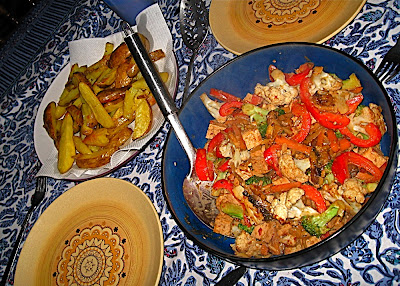 And here's my plate. 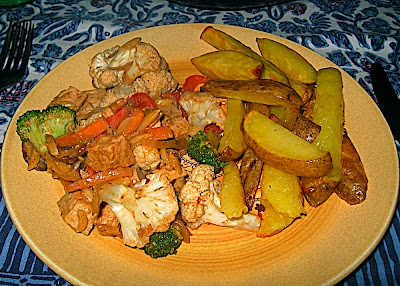 Dessert was also made (a team effort) but unfortunately I forgot to take a photo! I made the Lower Fat Banana Bread from Veganomicon but since I didn't have any apple sauce I actually just added an extra banana and it seemed fine...until I overcooked it in the oven (I think I had it turned up a bit high). It was still good hot and slathered in olivani.

Also recently was my Dad's birthday which, naturally, called for cake. But before we can get to cake you've got to eat dinner like a good girl right? 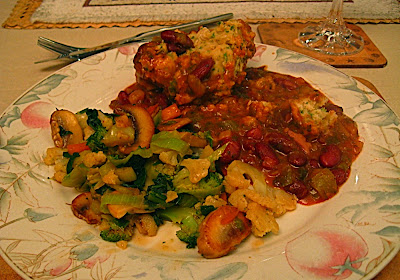 Mum made the vegetarian shepherds pie from Alison and Simon Holst's Meals Without Meat but adapted a dumpling recipe to put on top instead of the usual potato mash mixture. It's good. I should get the recipe. 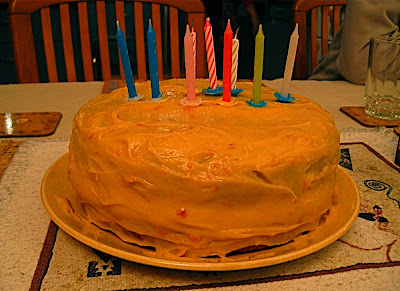 I was, unsurprisingly, in charge of cake and spent ages trying to decide what to make. I ended up going for the Peanut Butter Banana Cake from The 100 Best Vegan Baking Recipes. It is basically a banana cake with peanut butter cream cheese icing...and is really tasty!!! I can't believe I hadn't made it until now considering how many of Kris's other cakes I've made. 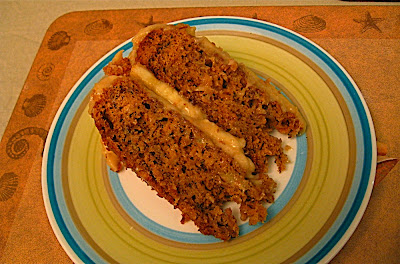