When food sparks interesting thoughts (or the lack of choice)

It is a known fact that nothing gets done properly in our house unless I do it.
- The Secret Diary of a Grumpy Old Woman by Judith Holder

One of my earliest vegetarian cafe experiences was at a place on Dominion Road called The Blue Bird, one of several Sri Chinmoy cafes in New Zealand. To be perfectly frank, these places creep me out. I don't know a great deal about Sri Chinmoy and his religion but from what I have read it seems impossible to work out what's really going on. Their meditation centre is across the road from my apartment, in the charming red light district of Auckland (okay, that was just a random aside but it never seems like the most relaxing place to attempt to mediate at) and we have a HUGE banner of his face on the side of our neighboring building (sometimes I feel like he's watching me, and not in some pleasant way). If anyone does know anything more about these guys then I'd be fascinated to hear.

Anyway, I've taken to getting my order to take away these days (hence the photos below being taken in our kitchen) since the place can have a tendency to make my skin crawl especially when I'm in a foul mood and don't want to listen to the constant sound of gentle woodwind instruments while I'm eating. Yes, foul moods are not uncommon if I've ventured out that far in the traffic. One thing that keeps me going back again and again is the possibility they might have these: 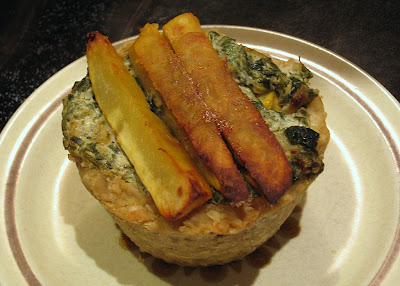 These, my friends, are Kumara-Chip-Topped Tofu Spinach Pies (that is one hell of a mouthful to try and say in one go) and are the most amazing thing I have ever eaten (okay, that's a fairly bold statement and possibly not strictly true...let's just say they are ridiculously delicious). I love them so much that I even attempted to replicate them myself with fairly successful results. Next time I make them (I feel them calling me!) I'll post the recipe.

In the winter they have soups. Always different but always delicious. This is some kind of roast vegetable soup with a name I cannot pronounce and I won't even try to spell. It was good. Plus they give you a generous slice of bread which I topped with my homemade hummus and spinach pesto (it's what you have to make when you buy a huge bag of baby spinach and haven't even got through half by the time it's starting to get old). 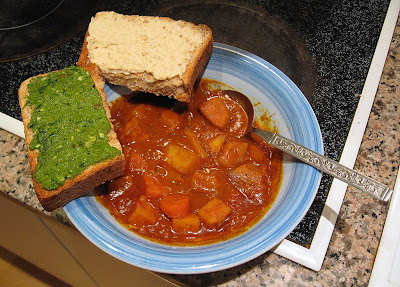 They also have sweet treats like a damn good apple crumble (available with soy ice cream too!!) and cake...delicious vegan cake, and who in their right mind could pass on that?! Usual flavours are banana, chocolate or apple, walnut and date (the best but also the least commonly available). Below is the good old banana cake. 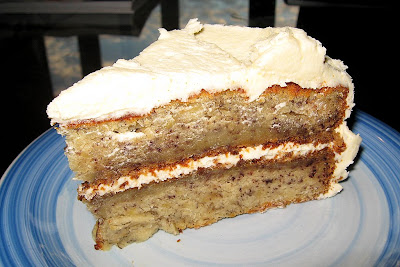 One Saturday, while we were biking around (clearly this was before the accident so I haven't been riding in several weeks), and spending too much money at the Parnell Farmer's Market (there are NO farms anywhere near Parnell so it's all rather amusing...but we did manage to pick up the odd bargain - 2 large bags of roasted unsalted cashews for $10, 2 big bags of homemade muesli also for $10, feijoa jam and some extremely hot homegrown, homemade potato crisps...J decided we ought to try the chili ones...I could barely get one down without gagging!) we picked up lunch to eat outside in the sun from the other Sri Chinmoy cafe in Auckland, The Sweetness-Joy of the Unknown Beyond. 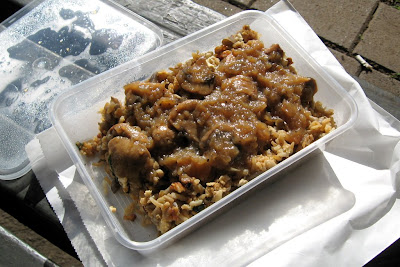 I got some tofu and brown rice loaf with mushroom sauce which I downed with a fresh, coconut milk smoothie. 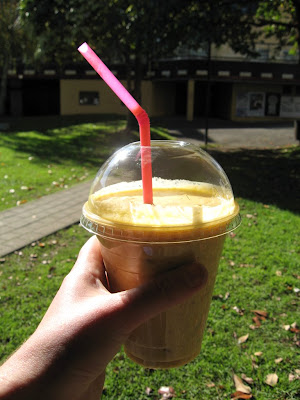 The food was good but I ate too much (I still can't believe I ate the whole lot!) which meant biking afterwards was on the more painful side! We're into winter now here so that was probably our last truly sunny weekend for a while! Auckland has a tendency rain every winter weekend (well, it also seems to rain half of summer too and if we have a Christmas without a drop of rain then it will be a miracle!).

Chinmoy cafes (as mentioned here). Again it was a similar experience to those in Auckland but at least you will always find good food. Actually wait, the girl serving us there was a little bit different to anyone I've met at the Sri Chinmoy cafes in Auckland in that she was really chatty and full of energy and jokes (mostly at my arm's expense). Hmmm...

J brought up an interesting point the other night. He thought it was interesting that out of all the purely vegetarian cafes and restaurants we've been to half of them have been

Sri Chinmoy ones. I don't know what this means other than that, well, there aren't many vegetarian cafes and restaurants in the meat and dairy loving country that is New Zealand (despite our large immigrant population, especially in Auckland). We also found it interesting that Raw Power, another vegetarian cafe I always seem to be raving about, appears to be run by a group of Asians and yet is one of the more western style vegetarian cafes here. These are all rather random facts at this point and I don't know what they all mean but they did cause us quite some discussion!