When rather short on time

The terrain about them was as though freshly painted, or rather, as though like an old landscape that had grown dead and dull it had been varnished and now shone out anew, each fragment of the enormous canvas, pristine, the whole, a glory.
- Titus Groan by Mervyn Peake
Life has been pretty hectic and exhausting (yeah, I know I say that a lot but it's been even more than normal if that's possible!) but hopefully things will calm down a little bit by the end of the month...but then again, probably not!

Since I'm so often short on time it's really handy to have super quick things around that require very little preparation and work but still taste good. I often have a container of Turkish Kitchen traditional falafel mix in my fridge for a quick dinner. Scoop out what you want, fry it up and hey presto! 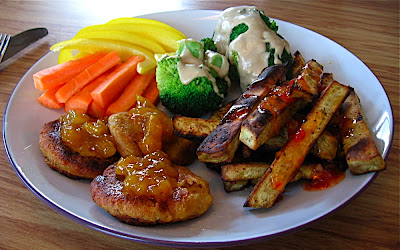 It's a habit of mine to dollop spoonfuls of tahini on top of my cooked veges. I'm too lazy to make a sauce and I adore tahini so it's a win win situation! Add some kumara chips and life is beautiful (or at least dinner!). 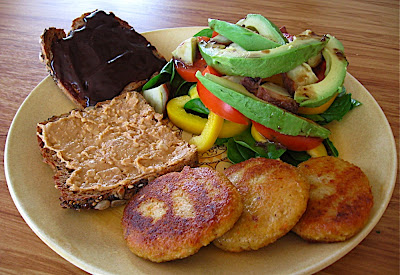 Falafel, salad and toast with peanut butter and hazel cocoa malt spread - the lunch of champions!

Believe it or not there have actually been occasions of late I've had time to be more adventurous (not often enough I admit but at least they appear at times!)... 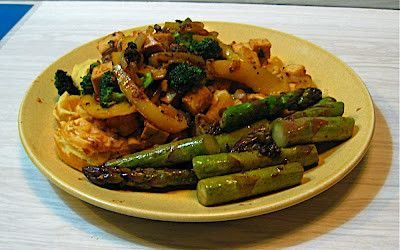 Cornmeal waffles with grilled, marinated asparagas (both from Vegan Brunch) and stir-fried veges and tofu. My waffles hated me and kept sticking to the waffle iron but they still tasted delicious which is the main thing I guess.